Nothing can be kept secret forever

Nothing can be kept secret forever 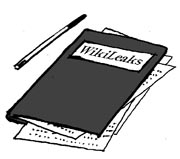 In the information age, the energy for Korea’s growth may come from the habit of doing things “ppalli, ppalli,” or quickly. At a time when things change at the speed of light, it is not proper to behave “manmandi,” or in a leisurely manner.

The equivalent of ppalli, ppalli in Hawaiian is “wiki wiki.” Wiki is the prefix in Wikipedia and WikiLeaks, which recently stirred up the entire world. This means that collective intelligence is faster and more efficient.

Taken literally, WikiLeaks means “leakage by collective brain power.” Launched in 2006 by Julian Assange, an Australian Internet activist, WikiLeaks aims to expose secret government documents. The leak of the Pentagon Papers to The New York Times by Daniel Ellsberg, a whistle- blower at the Pentagon, set the precedent for WikiLeaks. The papers revealed that the United States manipulated the Gulf of Tonkin incident to start a war against North Vietnam.

Although the U.S. government filed a suit against WikiLeaks on charges of leaking classified government documents, the U.S. Supreme Court returned a not guilty verdict on the grounds that the Constitution guarantees the freedom of the press so the press can dig up government secrets and inform the public.

But this time around, the indiscriminate exposure of U.S. diplomatic papers has left many people are perplexed. It revealed intelligence gathering activities of some diplomats and comments about world leaders without filtering the information. The revelations were so shocking that Italian Foreign Minister Franco Frattini said it was like the diplomatic community’s Sept. 11. The U.S. government is apparently nervous about the exposure. It mentioned the possibility of indicting WikiLeaks for violating espionage laws, while apologizing to the concerned parties.

But the greater the curiosity surrounding an affair, the harder the it is to cover it up. That’s the so-called Streisand effect. In 2003, Pictopia.com posted 12,000 photos of the California shoreline. Among them was an aerial photo of Barbra Streisand’s house. She demanded that the company erase it from its Web site and sued for invasion of privacy.

But the Internet site was accessed by more than 420,000 visitors and became even more famous. It is said that nothing can be kept secret forever. But sometimes, having a curtain on the public stage may be more important than we think.