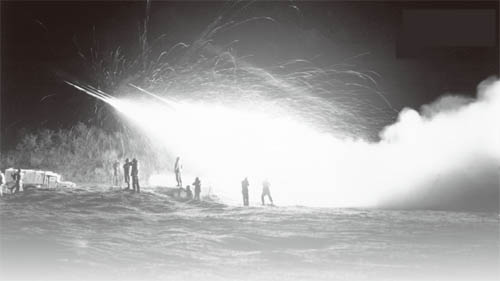 
Last week, the ROK 9th and 3rd Divisions were badly defeated in a bungled counterattack on the strategically important Omachi Hill.

During combat, when a division loses a third of its troops, it is deemed unfit for battle. Considering the huge hit that the two divisions took in the battle to retake Omachi Hill from the Chinese, it was fair to call the loss a total collapse on our part. 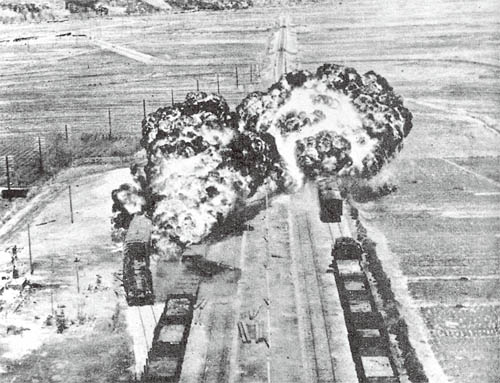 The PLA had penetrated the ROK portion of the defensive line, but U.S. troops cut off the enemy’s supply routes. In the photo, napalm bombs destroy rail lines in North Korea. Provided by the U.S. Army

The Chinese People’s Liberation Army was swift in their attack on Omachi Hill in Inje, Gangwon. The PLA was initially expected to seize the hill on the afternoon of May 17, but had already done so that morning. The PLA advanced past Omachi Hill and was now in the villages of Changchon and Soksa-ri, in the area around Gyeonggang - now in the vicinity of the Yeongdong Expressway.

Our American allies responded by attempting to limit the PLA’s advance by firing off 41,000 rounds of artillery. In addition, they sent bombers on 165 air strikes to disrupt PLA and North Korean supply routes and limit their advancement.

With the PLA penetrating our defensive line, my ROK 1st Corps to the east and the U.S. 10th Corps to the west were in imminent danger. I had determined that the PLA would soon head to Gangneung, so I relocated our command post from Gangneung and posted the Capital Division and the 11th Division along the defensive line, which stretched from Mount Odae to the East Sea.

With their supply route destroyed by U.S. air raids, the PLA was in desperate need of supplies. If they managed to advance to a sizeable city like Gangneung, the PLA would be able to take care of their concerns. In addition, the K-18 Airport was located in Gangeung. The U.S. Marine Corps had its troops stationed there, and as such, the area was well-stocked with supplies and ammunition. If we failed to prevent the PLA from reaching Gangneung, our troops would face further danger from a rested and well-equipped PLA.

Then there was the danger of us getting pushed down to Samcheok, Gangwon, or as far as Pohang, North Gyeongsang. In such a scenario, a joint effort with a U.S. naval ship in the East Sea would become impossible. The tense situation reached a peak on May 21. I was notified by the U.S. 8th Army that a meeting would take place on the runway of an airport under ROK 3rd Corps control in Yeongpyeong, Gangwon, to the west of the Daegwallyeong.

When I arrived, I got a clear view of the area where the ROK 3rd Corps had been defeated by the PLA. Dark smoke still billowed from the scene. The U.S. Air Force was continuing to drop bombs where ROK troops had left weapons and equipment. I had only been briefed through phone calls, but having arrived on the scene, I thought that seeing all that equipment wasted was appalling.

Gen. Eugene Ridings of the U.S. 3rd Corps was already on the scene by the time I had arrived on the runway. He made his way from the village of Gyeongan near Gwangju, Gyeonggi. We soon noticed two Cessna L-19 airplanes on the horizon, but one had been hit and was spewing gasoline from its belly. The plane managed to land safely, and out stepped out Gen. James Van Fleet of the U.S. 8th Army. It was my first time meeting the general in person. He did not look happy. He immediately unfolded a map on the hood of a jeep and proceeded to direct orders with General Riding and myself looking on.

“We’re in a serious situation here,” said General Van Fleet. “A huge pocket has formed in our defensive line. If we do not defend well against the PLA, things will get even worse.”

He looked us in the eye and said: “It is imperative that you two stop our enemies from advancing.”

Since the ROK 11th Division was short in combat experience, it would have the benefit of receiving fire support from a U.S. naval ship in the East Sea, if necessary. I told my officers that we were in good shape to take on fatigued PLA troops who were short on supplies.

It was important for the ROK 1st Regiment to make the three hour trek immediately to head off the impending attack. But we had a bit of a setback from Gen. Song Yo-chan of the Capital Division.

I got a call stating that General Song had disobeyed my orders and had prevented his 1st Regiment from departing. His reasoning was that without the 1st Regiment, the rest of the Capital Division would not be able to fight off PLA troops.

While the idea of a divisional commander overruling a direct order was mind-boggling - it was not out of the ordinary for commanders in the mountainous regions of the eastern defensive line to fail to see the importance of joint or cooperative efforts. They simply were not accustomed to taking part in such missions and often failed to see the big picture.

There was also the possibility of personal resentment on General Song’s part. The general and I were of similar age, and until recently, had been of the same rank. He earned the respect of many with his efficient and effective direction of troops in the mountainous regions of Gangwon.

I could not wait any longer. I hopped in a jeep and made my way to the Capital Division’s command post. Upon arriving, I asked where General Song was. An officer directed me to a truck that had been transformed and fitted with mattresses for commanding officers. I found General Song lying on his side on one of the mattresses. He immediately got up and seemed to understand the gravity of the issue at hand.

I asked if he would continue to disobey my orders. “I’m sorry, sir,” responded General Song. “I will obey your orders.”

The move came just in the nick of time.

According to reports, the ROK 1st Regiment started hearing shots in the distance as soon as it reached the Daegwallyeong area and People’s Liberation Army soldiers began appearing roughly an hour after its arrival on the scene.

If the ROK 1st Regiment had not reached their position in time and had allowed the PLA to advance past Daegwallyeong and into Gangneung, it’s unthinkable how the war could have turned out.

The ROK 1st Corps was also able to defeat the PLA rather easily and we continued to push the it back to the current border line until May 23.