Traditional tastes on the streets of Busan

Traditional tastes on the streets of Busan 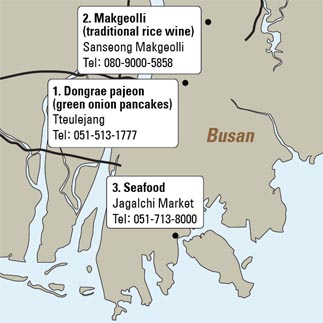 BUSAN - Many comparisons could be drawn between Busan and Seville, Spain. Geographically, both are in the southern part of their country, attracting tourists looking for a warmer climate. Culturally, Seville is a melting pot of Roman and Muslim cultures. Busan is influenced by Gyeongsang and has an undeniable hint of Japan, having been a trading port and settlement for the Japanese during the Joseon Dynasty.

And just like Seville was home to Don Juan, the fictional but legendary womanizer, Busan is also known for its men, who are said to be the country’s “real men” - tough, loyal and cool, like those in 2001 hit film “Friend.” Though, speaking from experience, not all Busan men are like that.

But men had little to do with my recent trip to Busan - in fact, I was there to explore some of Busan’s most interesting places to eat, for a taste of the city’s representative dishes.

My companions and I arrived at Gimhae International Airport after an hour-long plane ride from Seoul. It took us just 20 minutes by bus to get to our first destination - Tteulejang (051-513-1777).

Patrons at this traditional hanok restaurant overlooking the sea can not only eat good food, but can also learn how to cook traditional dishes in the Gyeongsang-style. Rows and rows of large dark-brown pots used for storing traditional Korean sauces are neatly lined up in the yard. 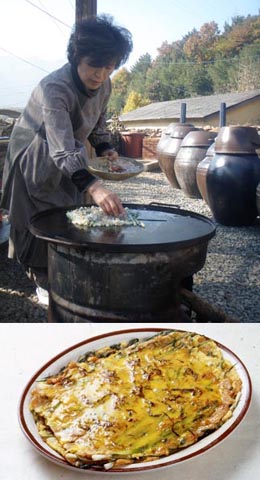 Kwon So-suk, the owner of Tteulejang, makes Dongnae pajeon in Busan. The restaurant also allows customers to make their own pajeon. By Kim Hyung-eun

The first item on our list was Dongnae pajeon. Dongnae is the name of a district in Busan and pajeon is a green onion pancake. This dish has been one of Busan’s key delicacies for centuries.

“A high-ranking Joseon-era official in Dongnae used to make an offering of Dongnae pajeon to the king on March 3, [the first day of spring in the lunar calendar],” said Kwon So-suk, who runs Tteulejang.

As we waited, Kwon showed us how the pajeon is made. First, she poured cooking oil into a large pan on a bonfire in the yard and then she added green onions, seafood and dried beef.

“Dongnae pajeon is different from other kinds of pajeon in that it is made of rice flour instead of regular flour,” she said, adding that the secret ingredient is the region’s green onion, which is sweeter than regular green onion.

When the pajeon was nearly complete, she added egg and sliced red chili peppers, saying that it’s like “finishing your makeup with some color.” 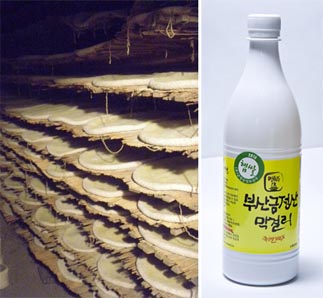 Yeast plates at Sanseong Makgeolli are stored using a centuries-old method. The brewery’s makgeolli was a favorite of former President Park Chung Hee.

My companions and I tried the pajeon, lightly dipping it in soy sauce. The sweetness and crispness of the green onion and red chilis worked well to compliment the softness of the seafood, beef and egg.

To top it off, we had a cup of makgeolli, traditional Korean rice wine, which always seems to be the perfect drink for the dish.

Tteulejang’s major fault is that it’s extremely hard to find. The other downside is the price. It costs 20,000 won ($18) for one Dongnae pajeon, which is more than at other places. Still, the price is somewhat justified because people are allowed to try their hand at making the pajeon themselves.

Makgeolli was the second item on our list that we wanted to try. Sanseong Makgeolli (080-9000-5858) is a makgeolli brand from Busan and it is the only makgeolli in Korea to be designated by the government as a folk liquor. It is most famous for having been a favorite of former President Park Chung Hee.

“Sanseong” means “mountain fortress,” which is a reference to where the liquor was created. The fortress was established during the Three Kingdoms period (57 B.C.-676). It is situated atop Mount Geumjeong, a breathtakingly scenic mountain in Busan. 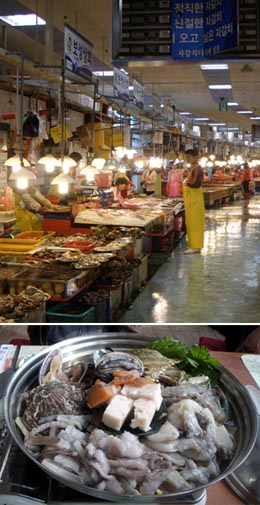 Fishmongers hawk their wares at Jagalchi Market, a visit to which is a must when looking for food in Busan.

People living in this area have been making makgeolli since the 16th century using fresh water from the mountain valley and their own brand of yeast. Its rich taste was so good that people from Japan and Manchuria even came looking for it, records show.

We were able to meet the president of Sanseong Makgeolli, Yu Cheong-gil, who, along with his sister, has been making makgeolli the traditional way for generations.

“The secret is our yeast,” Yu said as he showed us the storage room. “We make our yeast the traditional way: each yeast plate is made by hand. And they are all stored using a centuries-old method.”

The yeast is shaped into round plates, which facilitates maturation, and is stored for two weeks. Then it is mixed with boiled rice and fermented into liquor at a small factory nearby.

The 33-square-meter (355 square feet) storage room, which has been in the Yu family for generations, has space for hundreds of plates.

Yu said the room has the optimal conditions for yeast to mature - temperatures are kept between 40 and 50 degrees Celsius (122 degrees Fahrenheit) with the help of two braziers and the air circulates through 50-year-old reeds on the floor, bamboo screens on the wall and straw on the shelves.

Our next stop was a fish market, without which a visit to Busan would not be complete.

Some trace the history of Jagalchi Market to the early 20th century, but most say it became what it is today after the Korean War, when women started selling fish to make a living. The name comes from “jagal,” which means “gravel” in Korean, because of the gravel that used to cover the area.

As we passed by the port, a group of fishermen were putting freshly-caught fish flipping with life into buckets. We strolled by all kinds of fish displayed in interesting arrays as ajumma, or middle-aged women, tried to lure us to their stalls.

When it got chilly, we took refuge in a seven-story glass building with a roof apparently inspired by the V-shape of birds in flight. The building, opened by the Busan government in 2007, houses indoor markets as well as some nice seafood restaurants. So it’s the perfect place for tired tourists to enjoy a hot, rich seafood dish like the haemultang (Korean seafood stew) that my companions and I had.

If you are in Busan in early October, you can check out the market’s annual Jagalchi Festival, which offers performances and other events. If not, head over to Busan Tower, which is a 10-minute walk from the market. It’s an ideal way to walk off your feast while also enjoying a nice view of the charming port city.