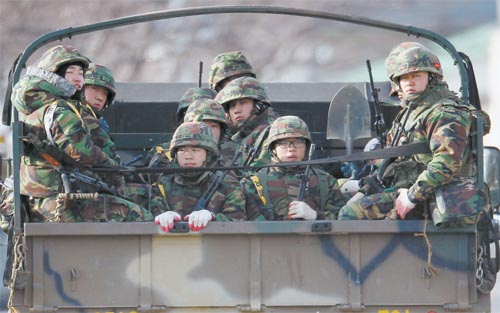 As the South Korean military began live-ammunition firing drills in the Yellow Sea yesterday, marines are transported on a truck on Yeonpyeong Island, which was shelled by North Korea on Nov. 23. [YONHAP]


A presidential committee suggested yesterday that the length of mandatory military service for young Korean men be extended to 24 months immediately as a way of strengthening the country’s armed forces after an artillery attack by North Korea.

It also proposed reviving a system of rewarding points to veterans applying for government jobs, which was declared unconstitutional more than a decade ago because it discriminated against women.

The presidential committee on defense advancement gave a 69-point proposal for military reform to President Lee Myung-bak, according to the Blue House. The government will review the proposals, the presidential office said.

Mandatory military service in the Army, South Korea’s main military branch, has been shortened from 24 months under an initiative by the Roh Moo-hyun administration in 2007. Currently, the service length is 21 months, and it’s supposed to shrink to 18 months by 2014.

According to sources, the committee had considered freezing compulsory military service at 21 months after the Cheonan’s sinking in March.

But after the Nov. 23 Yeonpyeong attack, which some call the biggest security crisis since the end of the Korean War, the committee decided to propose 24 months of service. The attack near the maritime border in the Yellow Sea killed four South Koreans including two civilians.

Proponents argue that extending compulsory military service is needed because the country’s low birthrate will cause a troop shortage in the near future. They also argue that a certain amount of time should be served so soldiers can hone their military skills. Every physically and mentally fit South Korean male is required to serve.

The committee also suggested re-introducing the “additional point system,” in which those who do military service are given extra points when applying for jobs at government agencies or public schools as an incentive for soldiers.

The system was criticized for favoring males over females. The Constitutional Court ruled it unconstitutional in 1999.

Another proposal by the committee is to transform the Marine Corps into a “Rapid Reaction Force,” which can deal swiftly with an emergency situation prompted by North Korea.