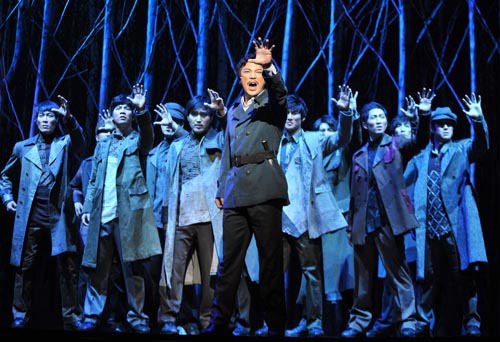 Beethoven is the focus of the first set of concerts. This one features Suwon Philharmonic Orchestra, playing “Choral Fantasy in C minor, Op. 80,” and the “Symphony No. 9 in D minor, Op. 125.” The conductor is Kim Dae-Jin, professor of music at the Korea National University of Arts.

The concert in Seoul is at 8 p.m. on Thursday at Kyunghee University’s Pyunghwa Theater.

Walk straight until you see Changdeok Palace’s stone wall. Turn left and pass Wonseo Park. The theater is located in the left alley.

Saturday: Jazz pianist and composer Hiromi Uehara, who was called a “forceful presence” by The New York Times, is known for a funky musical style that combines jazz, rock, classical, Latin and other genres. She was named Jazz Artist of the Year at the Golden Disk Awards this year.

In this concert, Uehara will perform pieces from her newly released album “Place to Be,” including “Bern Baby Bern,” “Island Azores,” “Choux a la Creme,” as well as the title track.

Dec. 26: This is a benefit concert for the United Help for International Children organization, which funds surgery for disadvantaged children.

The Mostly Philharmonic Orchestra and flutist Lee So-young are the featured guests.

Dec. 10 to 26: This production celebrates the 50th anniversary of Shilhum Theater.

The play aims to show the difference between the social status of France in the 18th century and how it is still portrayed in the present.

It stars renowned theater actors Suh In-suk and Lee Young-bum. It is directed by Ku Tae-hwan.

This performance is only for ages 13 and up.

Open run: Since the first performance of “Jekyll and Hyde” in Korea in 2004, this musical has been a favorite with Korean audiences.

Jekyll and Hyde is set in London in 1885. Henry Jekyll is a doctor and scientist who lives with his sick father and decides to devote his life to finding a cure for his mental illness. He ultimately decides to experiment on himself, which is when he starts to form his frightening other half - Hyde.

Jekyll is played by musical theater actor Kim Jun-hyun. Kim made a name for himself playing the title role in “Jesus Christ Superstar” in 2009.

Jamsil Station, line No. 2 or 8, exit 3, and go past the front entrance of the Lotte Hotel.

To Jan. 15: Winner in six categories at the 4th Musical Awards and the 16th Korean Musical Awards, this original musical about colonial-era resistance fighter Ahn Jung-geun returns to the stage once again. This year’s production features new high-tech effects such as 3-D images and a real train that rises into the air.

Dongkuk University Station, line No. 3, exit 2 Take a shuttle in front of Taegeukdang.

Dec. 14 to Mar. 27: Aida returns to Korea after a five-year absence. The story of Ethiopian princess Aida is one of forbidden love. Aida is captured and sold into slavery in Egypt, where Egyptian military commander Radames falls in love with her. As the military commander of Egypt, Radames is forbidden to love a woman from a different country and he struggles to choose between her and his service to the Pharaoh. To make matters worse, the Pharaoh’s daughter Amneris is in love with him. Will Radames chose love or success?

Tomorrow to Dec. 17: The Seoul Independent Film Festival will feature all manner of independent movies from dramas and documentaries to animation and experimental films. This annual showcase - with 64 films this year - is dedicated to exchanging ideas and mutual understanding, promoting international exchange and having the audience be active participants as volunteers and jury members. Some documentaries that will be shown tackle recent political issues like the four-rivers restoration project and the Yongsan redevelopment project.

There is a competition with awards given out for domestic independent films.