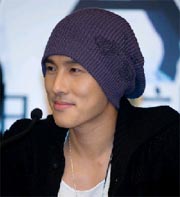 Kim has been fulfilling his service as an administrative worker at the Seodaemun District Office.

“I learned to be thankful for my life while working alongside regular citizens,” Kim was quoted by ISplus as saying on the day of his discharge. “I feel that, as a singer who receives so much affection from his fans, I am truly blessed.”

The singer added that when the other two members of Shinhwa, Andy and Min-woo, are discharged from their military service in 2012, Shinhwa will make a comeback.