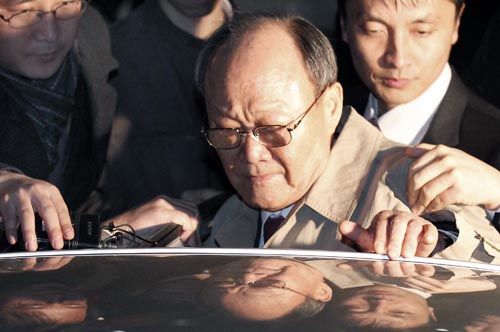 
Chun Shin-il, chairman of Sejoong Namo Tour and a close friend of President Lee Myung-bak, was arrested Tuesday night over allegations of bribery.

Chun, 67, is suspected of taking some 4 billion won ($3.5 million) in kickbacks from Lee Su-woo, president of Imchon Industrial Co., an affiliate of Daewoo Shipbuilding & Marine Engineering, in exchange for helping his company convert its debt to equity and avoid a tax probe in 2006.

In October, during his absence, prosecutors raided Chun’s office. They said they have Lee’s testimony that he handed over 2.6 billion won to Chun.

Chun has been summoned twice since his return from Japan but has denied bribery allegations, investigators said.

Chun and President Lee are both graduates of Korea University in Seoul. Chun is said to have played a key role in Lee’s presidential campaign in 2007.