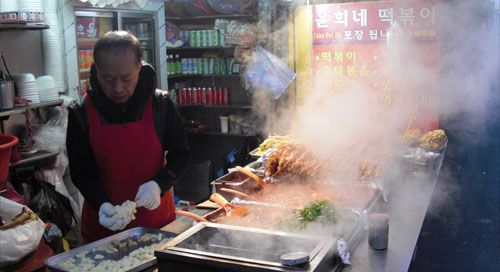 
When Cho Nam-hyun woke up this morning at 5 a.m., he knew there would be no surprises today. He would get the food, prepare it and sell it. Cho is owner of Yoonee’s Tteokbokki, a food stall in a Myeong-dong side street, surrounded by shoe shops and beauty product outlets.

Cho has been doing the job for 15 years, seven days a week, and he has become a master of his simple, hearty fare. In the morning, he skillfully cuts sausages, stirs soups and fries potatoes. His shop, which sells deep fried vegetables, Korean-style blood sausages, hot dogs on sticks and other hearty snacks, is open from 6 a.m. to 11 p.m. Cho would not reveal his age, but his thin hair and leathery skin suggest he has seen a lot of things in life.

It is 8 a.m., and it’s raining hard. The stall’s six fluorescent lights shine on a metal table that groans under the heavy deep fryer. Hardly anyone is on the street, which gives Cho enough time to prepare everything with dedication and detail. Metallic noises shatter the morning silence when he mixes beer batter for the Korean-style hot dogs with the kind of mixer you would find on a construction side.

It is all part of a routine Cho has carried out for years. Refilling unlabeled bottles, cutting cardboard for the junk collector and stirring tteokbokki, a spicy Korean rice cake. The old man is framed by canned drinks, napkins, plastic cups and plates. His red apron is the only dab of color on the premises. He’s allowed himself to grow a small belly.

Cho has had three jobs in his life. First, he was a team manager for 10 years at a steel producer. When he had to quit his job, he invested his severance pay in the stock market. After 25 years in the stock business, the 1997 Asian financial crisis hit Cho hard. He lost everything except for enough money to buy the food stall from a friend. The friend taught Cho how to make the snacks.

Just two shops away, an older lady stands in an identical food stall, selling the same dishes. Cho doesn’t resent the competition, but it makes his life a bit more difficult. “We’re selling the same stuff for the same price so the only difference is how good I am at getting the customers,” he says.

“When a nice lady with a clean outfit and a sunny smile stands behind the counter, it attracts more customers.” He is talking about his wife to whom he has been married for 31 years. Cho’s face brightens only when he talks about her.

Cho says he has no personal attachment to what he is doing. His job was born of necessity - to survive.

This was and probably always will be the reason he gets up in the morning. “I will do the job as long as I have to. As long as I can.”

At 11 a.m., Cho’s son steps in without uttering a word or making eye contact with his father. Both know what to do. No words are needed. They work side by side with only occasional comments about how the food should be prepared. Cho takes a break, sitting on a small plastic chair, having a soft drink. Eventually, his son will succeed him. All he needs is more practice.

Cho has gotten used to his lifestyle and does not intend to change it. “I am too old,” he says, “but if I were younger, I would be doing something different. Studying! Studying everything! But especially business.”

His life is regular, and he’s not waiting for any surprises. He seems to be without regret. He has no worries about how his life turned out. Maybe he has gotten used to it all. Maybe he is tired of thinking about it.

He does not have any advice for the younger generation and generally doesn’t seem to care too much about anything except his wife.

Cho’s wife takes over the stall at noon and he can leave. By now, the streets are thronging with life and his wife will be busy selling food to the first wave of hungry office workers. Cho will go and swim in a public pool, take a nap and spend the rest of the afternoon reading or watching television.

When he goes to bed at 9:30 p.m. he already knows what he will be doing tomorrow: Getting the food, preparing and selling it.