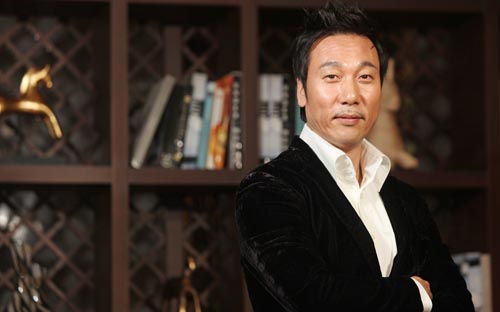 Lee Moon-sae talked with the JoongAng Ilbo about his career at the Marriott Hotel in Yeouido on Oct. 19. By Kim Do-hun


Lee Moon-sae is known these days a beloved entertainer, but he is perhaps most famous as a singer of heartwarming ballads that dominated the genre in the 1980s and ’90s. His hits like “Blue Bird,” “Gwanghwamun Love Song,” “Old Love” and “Early Morning Discount” brought him fame and a loyal following of fans.

Since then, however, he has focused more on his career as a television and radio show host, and has become known for his witty sense of humor. His last full-length album was released in 2002.

But now he is back to music with a new ballad called “Love Always Runs Away,” which is part of the soundtrack of the MBC drama “Flames of Desire.”

“For the past few years, my days and nights were spent either planning a performance or being on stage,” Lee said in an interview on Oct. 19 prior to his concerts at Olympic Gymnastics Arena. “I did feel responsibility as a singer to release a new album, but just keeping up with the concert dates was overwhelming for me.”

The “Lee Moon-sae Sunset Glow Nation Tour,” which started last year and ended in May this year, gathered more than 95,000 fans for 47 concerts in 23 cities all over Korea.

“I think performing is the most attractive part of my job,” Lee said. “Even if I don’t have any new songs, it fills my heart just to recreate my old songs and perform them in front of my fans. I feel alive when I’m with them.”

Before the tour, Lee did smaller, more intimate performances in houses with fewer than 1,000 seats because he believed that the size and scale of a concert was inversely proportional to the connection he can make with the crowd.

“Although the large scale concerts did lack the warmth that I was able to share with my fans compared to before, I have confidence in my work from performing on small stages for so many years,” he said.

He was ready to put that confidence on display at his three-concert series at Olympic Gymnastics Arena, with a capacity of more than 10,000, though he did express some anxiety about the event.

Lee said that it was the first time since his debut in 1983 that so many fans would see him perform.

“I’m worried that the concert is on a scale I’ve never experienced before,” the singer said prior to the concert. “It may be bigger, but I will not lose the simple and genuine mood of my songs.”

He appeared on Mnet’s talent searching program “Superstar K,” where he offered advice to the crowd of auditioners.

Some musicians have even given accounts of Lee visiting indie band rehearsals around Hongik University and buying dinner for bands.

He can currently be heard on MBC’s “Good Morning, This is Lee Moon-sae” radio program, a show he’s had since 2004.

The show builds on the success of his previous stint as the host of MBC’s “Starry Night,” where he was the show’s longest serving host, from 1985 to 1996.