Fans line up in Japan to get glimpse of Korean stars

Fans line up in Japan to get glimpse of Korean stars 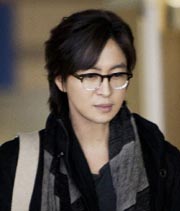 More than 4,000 fans gathered at Haneda Airport in Japan on Sunday to see Hallyu stars Bae Yong-jun and Kim Hyun-joong, who flew to Tokyo to participate in a charity event this week.

“Around 300 security officers had to be urgently mobilized because of the sudden rush of fans and press,” Keyeast, the stars’ management company, said in a press release. Some fans waited hours, and even overnight, to catch a glimpse of Bae and Kim. The stars flew into Haneda from Gimpo Airport in Seoul. They will attend a charity function on Tuesday.