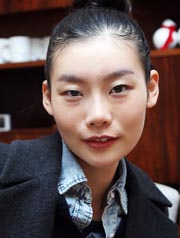 Lee Ji-min edged out the competition in the first season of “Korea’s Next Top Model,” winning over the judges with her unique features and potential to be a big star.

The Dongduk Women’s University student was named as the winner of the popular reality show on Saturday. The program is the local version of “America’s Next Top Model” and airs on cable channel Mnet.

Lee will receive 100 million won ($87,293 thousand) and become the face for the makeup brand SK-II. She will also be featured in the fashion magazine “W.”

The show gained an average audience share of 2 percent and generated a healthy amount of buzz in part because of supermodel Jang Yoon-ju’s involvement as host of the program.