Comedians do good with cheeky calendar

Comedians do good with cheeky calendar

When the men of MBC reality show “Infinite Challenge” made their first calendar three years ago, they didn’t know it would be such a hit or that it would do so much good. Neither did they know they would spark a trend in television.

But that’s exactly what happened.

The show started the calendar project in 2007 as a way to raise money for charity, and the project has been a great success so far, with the show raising 113.7 million won ($98,000) from sales of its 2010 calendar and donating the money to the Green Umbrella Children’s Foundation in November. Excluding production costs, all of the proceeds from the calendar sales are given to charities.

This year, the show decided to make the calendar photo shoots interesting with a friendly photo competition. The comedians designed their own photo shoots each month and a panel of judges chose the best, and worst, photos of the bunch, putting the best photo in the calendar for that month. The celebrities who came in last two times were eliminated from the competition. In the last month of the competition there were three stars remaining and the cover model was chosen from among them. 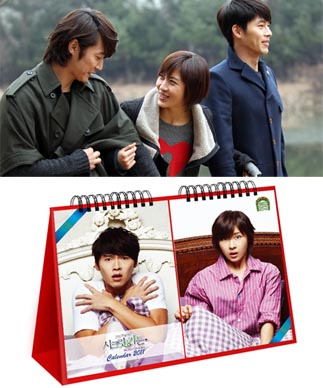 Calendars published by television shows are catching on among viewers. The reality show “Infinite Challenge,” top, and hit drama “Secret Garden” have received thousands of orders for 2011 desk and wall calendars. Provided by the shows

In the comedic spirit for which the show is famous, there was another penalty for the celebrities who got eliminated. They had to pose for cheeky photos, partially in the flesh, that ultimately appear on the calendar’s back page. The winning star not only won the right to be on the cover but also received a small block of gold.

The cover model winner was announced and the photos revealed on a special episode of the show broadcast earlier this month.

All of the publicity has given the calendar’s sales a boost. Next year’s calendar has actually been so popular that there is a long waiting list. A customer ordering a calendar this week will have to wait at least a month before receiving it, according to the calendar’s Web site.

Lim Mi-ah, 30, a librarian, is one of the fans waiting for her calendars to be delivered.

“It has become a yearly ritual for me to purchase the ‘Infinite Challenge’ calendars. This is my third year buying them,” Lim said.

“My friends love it when I give [the calendars] to them as gifts because it’s hard to get a decent calendar these days,” she said.

Since the 1997 Asian financial crisis, companies have reduced the number of calendars they print and distribute for free.

While “Infinite Challenge” may see calendar-making as a charitable venture, other shows have also latched onto the idea as a way to promote their shows. For example, the SBS hit television drama “Secret Garden” started producing its own calendar this year.

“We decided to publish just 3,000 calendars to celebrate our high audience share, but in two days we received pre-orders for 12,000 calendars,” said Roh Jung-hyun, a vice team head at Contents Hub, an SBS affiliate that develops promotional products for the network.

Secret Garden, the story of a rich man and tomboy who swap souls, had an audience share of 28 percent as of the second week of December, the highest among Saturday-Sunday prime time dramas.

The desk calendar, which has photos of leading actors Hyun Bin and Ha Ji-won, costs 12,000 won - more expensive than other calendars - but that hasn’t stopped fans of the show from buying it. As of this week, Contents Hub said it had received approximately 20,000 orders for its calendar.

“Everyone needs calendars,” Roh said. “It is a very accessible and practical item. It also allows us to promote our show all year.”