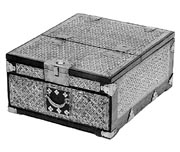 In the first stage, you get a fever, become lethargic and ache all over. You may even lose consciousness. Next, red spots develop on the face and arms and then they spread to the whole body. One or two days after the initial symptoms of the disease appear, small marks pop up on the face and arms, turning into pustules as small as a bean. After eight to nine days, scabs form over the wound and peel away leaving tiny scars. These are the symptoms of smallpox.

Until the end of the 19th century, smallpox was something one had to suffer through, as was the case with measles. Three to four children out of 10 lost their lives to the disease, and another three to four were pockmarked for life.

At the end of the Joseon Dynasty, there was a legendary pockmarked person called Yu Sagwa. Once, when he went to a gisaeng (courtesan) house, he overheard a gisaeng seated next to his friend whisper, “Does a man that looks like him have a wife?”

After that, Yu not only stopped visiting gisaeng houses but also stopped looking in the mirror. Lucky for him, there weren’t many mirrors, which at the time were often little more than polished stones.

In 1883, Ji Seok-yeong opened a clinic for cowpox (a less severe form of smallpox) at his home after having learned in Japan how to make cowpox vaccine, which helped prevent smallpox. From that point on, the number of pockmarked children started to decrease steadily.

In the same year, the government of the Joseon Dynasty invited Joseph Rosenbaum, an American engineer, to build a glass factory near the Han River. The factory failed to produce glass, but imports of plate glass increased rapidly around that time. It wasn’t until the beginning of the 20th century that Korea started producing plate glass.

The introduction of plate glass made glass mirrors more available and soon everyone was staring into them.

A century later we Koreans are still obsessed with how we look, especially compared to other people. Thankfully, there are few people who find it frustrating to look in the mirror because nowadays we have plastic surgery.

Chinese philosopher Zengzi taught his pupils to reflect on themselves three times a day. These days, people look at their reflection more than 30 times a day. In a culture like this, it’s difficult not to be obsessed with appearance. But I wish more people would take Zengzi’s advice.