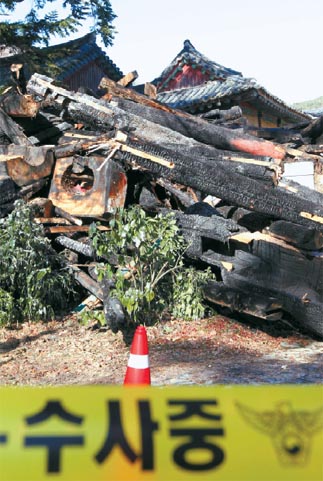 Cheonwang Gate, at Beomeo Temple in Busan, collapsed yesterday after a fire broke out at the temple. Police suspect a man that was captured on CCTV and is offering 10 million won (8,673 dollars) for his capture. By Song Bong-geun

BUSAN - A 1,300-year-old Buddhist temple in the southern coastal city of Busan was partly damaged in a fire that is believed to be an act of arson, police said yesterday.

The fire broke out around 10 p.m. Wednesday on a main wooden gate of Beomeo Temple and was contained about three hours later, the police said. The destroyed Cheonwang Gate (The Gate for the Heavenly King) is one of the temple’s major architectural structures that honors four mythical kings who each govern one of the directions of heaven - north, south, east and west.

Police said footage from a surveillance camera showed a man throwing an unidentified object at the gate and fire breaking out afterward. They were investigating several suspects who have arson records.

About 30 fire trucks and 70 firefighters were dispatched to the scene. To prevent the spread of fire to other adjacent wooden treasures, the firefighters had to first take apart the gate with the consent of temple authorities, the police said.

The four heavenly king statues set up at the destroyed gate fortunately were copies, with the originals preserved in the temple’s small museum, they said.

Beomeo Temple was built in 678 during the Silla Dynasty and is one of three major temples in Korea’s southeastern region, along with Haein Temple and Tongdo Temple.

Several major historic pieces of architecture have been destroyed by arson or fire in recent years, including the iconic gate of Sungnyemun, also called Namdaemun, in the center of Seoul and Naksan Temple in Yangyang County, Gangwon, on the east coast.