New artifacts from the Silk Road

New artifacts from the Silk Road 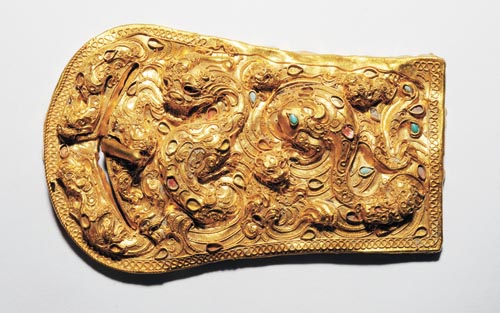 
Several art institutions have featured artifacts found along the Silk Road, but in a new exhibition at the National Museum of Korea visitors will be able to take a virtual stroll along one of the ancient routes. They are guided by a travelogue written by a Buddhist monk named Hyecho, who lived during the Silla Dynasty (57 B.C. to 935).

The exhibition, entitled “The Silk Road and Dunhuang: A Trip through the Western Region with Hyecho,” runs until April 3 and features around 220 artifacts from 10 museums in China’s Xinjiang Uighur and Ningxia Hui Autonomous Regions and Gansu Province, which lie along the Silk Road.

One of the highlights of the exhibition is “Memoir of the Pilgrimage to the Five Kingdoms of India,” which is being shown in Korea for the first time.

The work, on a three-month loan from the National Library of France, is an ancient scroll written by Hyecho circa 727. In it, he documents his four-year journey along the Silk Road.

The travelogue was found by French archaeologist Paul Pelliot in 1908 in the Dunhuang Grotto in China.

The Silk Road was a trade route connecting Asia and Europe, serving as a vital link for cultural exchange between Eastern and Western civilizations.

This exhibition focuses on the route east of the Pamir Plateau in Central Asia, which is the one followed by the monk Hyecho. 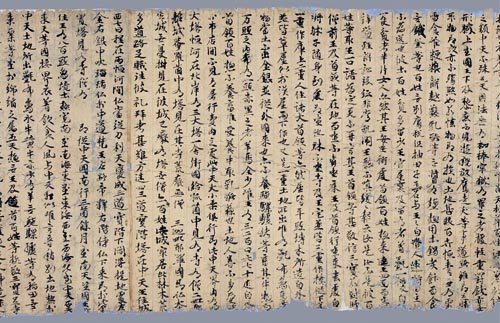 “Memoir of the Pilgrimage to the Five Kingdoms of India” by the Buddhist monk Hyecho. Provided by the museum


Stepping into the exhibition hall, visitors are greeted by a large screen playing a video that shows the Silk Road as it is today. It also shows the places where the artifacts in the exhibition were found so visitors can trace their path as they move through the galleries.

The exhibition has four sections: “Cities of the Silk Road,” “Silk Road Life and Culture,” “Dunhuang and the Memoir of the Pilgrimage to the Five Kingdoms of India,” and “The Road Leads East.”

The second section shows some of the silk produced along the route.

“The silk cloths have mostly deteriorated because of their age. It’s very difficult to find silk that keeps its own color and texture,” Choe said. “So we can only imagine how beautiful and detailed the patterns and colors of the silk were based on pictures painted during that period.”

Hyecho’s travelogue is displayed in the third section, along with a model of the grotto where the document was found.

Along with the model of the Dunhuang Grotto, the exhibition also features a model of the oldest grotto in Dunhuang.