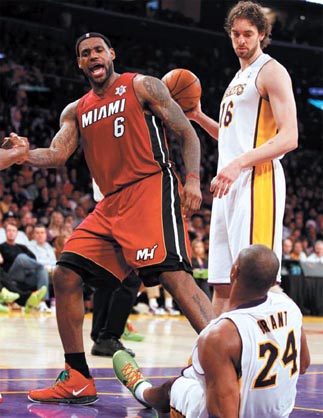 The Miami Heat’s LeBron James, left, and the Los Angeles Lakers’ Pau Gasol, right, look down at Kobe Bryant after Bryant was called for an offensive foul during the second half of their NBA game in Los Angeles on Dec. 25. [REUTERS/YONHAP]

LOS ANGELES - LeBron James and Kobe Bryant ran their mouths while they jogged downcourt, not quite making eye contact during an unpleasant conversation in the closing minutes.

“Just asked him what he got for Christmas,” James said.

Although the two superstars wouldn’t reveal what angry words they exchanged, it wasn’t tough to pick out a few statements Saturday. While Kobe and the Los Angeles Lakers got a disturbing first look at the Miami Heat, LeBron got the last word at Staples Center yet again.

James had 27 points, 11 rebounds and 10 assists while hitting a season-high five 3-pointers, and the Heat thrived on the holiday stage in a 96-80 victory.

Although both teams called the game a television curiosity rather than a potential NBA finals preview, it clearly meant something to James, who had his third triple-double with Miami and the 31st of his career. James also outplayed Bryant, who scored 17 points, in his second straight Christmas win in the Lakers’ home arena, following last season’s victory for LeBron’s Cavaliers.

“We’re not trying to make a statement to anyone,” James said. “We’re trying to show each other that we can play at a high level and try to get better every game.”

While the Heat realize Boston and Orlando are much more important obstacles to their championship hopes, and while the Lakers don’t get terribly excited about playing anybody until the playoffs, there was a palpable edge in the crowd at Staples Center for this intersectional matchup - until the Heat’s steady defensive effort flattened the Lakers in the second half.

Chris Bosh had 24 points and 13 rebounds, Dwyane Wade added 18 points on a sore knee and the Heat won for the 14th time in 15 games while flustering the two-time defending champions into a terrible offensive performance, starting with Los Angeles’ 14-point first quarter.

“Our whole thing is just playing solid defense the whole game,” Bosh said. “That’s the primary part of our identity. Our backbone right now is defense.”

James played a balanced, patient game, even after a technical foul near halftime for an under-the-basket scuffle with Lakers defensive stopper Ron Artest. James’ teammates contributed enough to keep the Heat comfortably ahead, with Bosh playing an outstanding first half and Mario Chalmers contributing 13 points in a reserve role, including three 3-pointers.

Pau Gasol scored 17 points for the Lakers, who fell behind early and never caught up to the tantalizing new contenders for their title.

Although Bryant wore garish green shoes for the holiday, his Lakers simply didn’t raise their games to meet the spotlight that follows Miami, falling well behind in the first half and never making a run.

“It’s like these games mean more to our opponents than they do to us,” Bryant said.

“I think we need to get that straight - play with more focus, put more [emphasis] on these games. I don’t like it. .?.?. We know what we’re capable of doing, and that’s part of the problem.”

Lamar Odom had 14 points and nine rebounds for the Lakers, who have lost two straight at home after winning five in a row on the road, following up Tuesday’s collapse against Milwaukee.

Coach Phil Jackson dislikes the Lakers’ annual spot on the NBA’s Christmas schedule, and perhaps for reasons beyond the season: Los Angeles dropped to 4-8 on Christmas since 1999, including last season’s one-sided loss to Cleveland, which ended with dozens of giveaway foam hands getting thrown on the court.