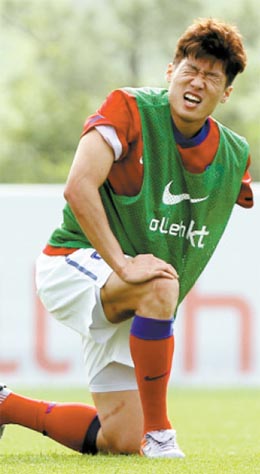 An annual medical checkup with Manchester United in May is said to have heavily influenced Park Ji-sung’s decision to retire from the national football team at the end of the 2011 Asian Cup next month.

According to Park’s father, Sung-jong, his son’s decision to retire after the AFC Qatar Asian Cup 2011 next month is due to a diagnosis from Manchester United’s medical staff.

They told Park that his right knee - which has been repaired twice - would be able to withstand roughly five more seasons in the English Premier League at most, but added his professional career would be cut by up to three years if the Korean star continued to compete for his country’s national team.

“We were told my son’s football career could be cut short by as much as three years if he continues to frequently travel long distances to compete for the national team,” the elder Park said in an interview with the JoongAng Ilbo. “He was told that if he continues at this rate, he could play another three years at most.”

Park had eluded to retiring from the national team since the end of the 2010 South Africa World Cup in June. After being eliminated from the World Cup in a 2-1 loss to Uruguay, Park said: “It was regrettable to know that I had competed in my last World Cup.”

“If Ji-sung can’t compete at the 2014 Brazil World Cup, he believes that it’s better to allow some of the younger players opportunities to play now rather than later,” said Park’s father.

Park’s right knee has been operated on twice and is known to swell and fill with fluid after long flights between Korea and Europe.

Park had the medial semilunar cartilage plate on his right knee removed in March of 2003 while with PSV Eindhoven of the Dutch Eredivisie, and had another operation on the same knee when he received a lateral meniscus autograft transplantation in May 2007.

Park has had to deal with pain and fluid in his right knee since September of 2004. The swelling and fluid build-ups have been occurring more frequently as of late, resulting in Park having to miss international friendlies against Spain in June and Japan in October.

“When the immune system is weak, inflammation can result in an area of the body that’s in poor shape,” said Dr. Song Joon-seob, United Hospital director and the head physician of the national team.

“Likewise, Park experiences problems in his right knee when he feels the stress of long flights.”

Park has always maintained that he would ideally like to retire from the national team or the game of football while he is still at the top of his game.

“Ji-sung has not been strong in stating his real intentions and sidestepped the issue every time people have tried to sway him from retirement, but he has always thought of the Asian Cup (in Qatar) as his last tourney with the national team,” said Park’s father.

Park departed England yesterday after playing the entire match in a 2-0 win over Sunderland to join the national team’s overseas training camp in Abu Dhabi, U.A.E.