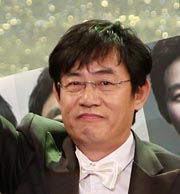 Lee Kyung Kyu, 51, of the “A Man’s Worth” segment of “Happy Sunday,” won the 2010 KBS Entertainment Award on Saturday to break the Korean record for the most television awards won in a career.