Director gets to heart of defectors’ struggle

Director gets to heart of defectors’ struggle 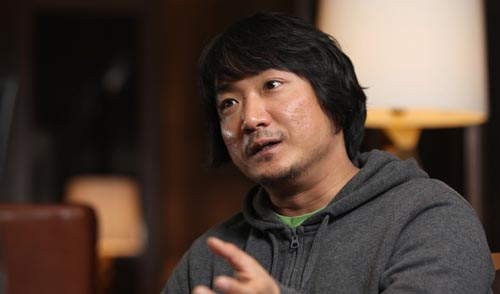 Director Park Jung-bum has been praised in Korea as the year’s best new director. [JoongAng Ilbo]


Despite the increase in the number of North Korean defectors in South Korea, there are few films or television programs that show what their lives are like once they arrive.

So when “The Journals of Musan” - which tells the story of a North Korean defector’s escape and resettlement in South Korea - was screened at film festivals earlier this year, it caught the attention of critics, festival judges and the media. The film focuses on how defectors deal with living in a capitalist society and their struggle to fit in.

But the subject matter was only part of the reason for the movie’s appeal. The other was the film’s director, Park Jung-bum, who has been named by many Korean critics as the best new director of the year.

After its debut, film critic Kim Young-jin praised Park as the person who will sustain the nation’s film industry for the next decade, and Taiwanese actress Yang Kuei Mei, one of the judges at this year’s Pusan International Film Festival, said that “The Journals of Musan” was so powerful that it lingered in her mind long after she had seen it.

The film, which is Park’s first full-length feature, has been making the rounds on the festival circuit and has already won several awards.

Earlier this month, Park received the Etoile d’or (Golden Star), the top honor at the Marrakech International Film Festival, which took place in Morocco on Dec. 11.

In October, Park won two awards at PIFF: the New Currents Award, the festival’s highest, which is given to first- and second-time Asian directors, and the Fipresci Award, which is handed out by international film critics.

“The Journals of Musan” is also a favorite for the top award at the International Film Festival Rotterdam, which will be held next month in the Netherlands.

It will be released in Korea next month.

The film is based on Park’s year-long relationship with a close friend named Jeon Seung-chul. Jang defected from the North with his mother and older brother but died from stomach cancer in 2008 at age of 30, just six years after his escape.

“[Jang] was a younger brother of my college friend. He used to play hockey up in the North but he was also interested in filmmaking so we used to say that we should make a movie together someday,” Park said. “We lived together for about four months and as we got to know each other, I became interested in making a movie about defectors. I even joined a defectors’ group.”

In meeting people from the North, Park said he began to see how their lives had changed as a result of their escape.

“They come here to be happy but when they arrive they become the poorest people in the society. I wanted to shed light on their lives, which are almost like those of orphans.”

All of the stories in the film are based on Park’s experiences with the defectors he’s met, including one who betrays another for money and another who confesses to having killed a friend out of extreme hunger.

Park decided to develop the short film into a feature only after Jeon’s death.

“I was afraid to use their difficulties as a motive [for the film], but many people encouraged me to go ahead with the project,” Park said, because they thought it was important for the defectors’ stories to be told.

In addition to directing, Park also plays Jeon in the film. “My memories with Seung-chul are so vivid, it would have been difficult to explain them to someone else,” he said.