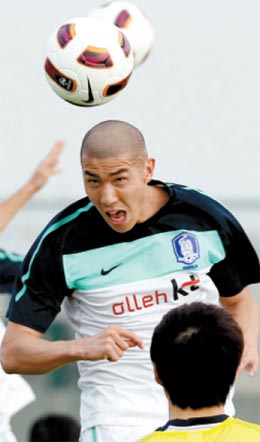 ABU DHABI, U.A.E. - Cha Du-ri was a promising 22-year-old midfielder on the Korean football squad that reached the semifinals of the 2002 World Cup.

One of the lasting images from the 2002 Korea-Japan World Cup was the image of Cha running around the field with a Korean flag draped around his head.

Fast forward to 2010 and Cha, son of legendary former Korean midfielder and former national team manager Cha Bum-kun, is now one of the seasoned veterans on a young Asian Cup squad. The right fullback, who plays professionally for Celtic FC in the Scottish Premier League, is the third oldest player on the team next to Lee Young-pyo, 34, and Kim Yong-dae, 32. Cha thinks the large influx of young, energetic talent can work to the national team’s advantage, but if not channeled properly, their lack of experience could work against them.


Q. Celtic defeated its rival Rangers on Sunday. How do you feel about playing with Ki Sung-yeung on the same team?

A. I have yet to play in the Old Firm rivalry but know that it’s a very hostile environment for players. I’m glad our team won the match.

I think for both of us to play on a historic club in the Scottish Premier League will help to bring exposure to Korean football. Former Celtic player Shunsuke Nakamura is still a popular player with the Celtic fans. I don’t think that will be possible with me but looking at the way Sung-yeung is developing, he can become that type of player who can become a key contributor for Celtic.

Does Ki visit your house often?

Yes, he visits a lot and often sleeps over at my place. His place is merely a 15 minute drive away, but he’s single. I know what it’s like to go to an empty home at the end of the day. I try to invite him over as much as I can. It also helps that Sung-yeung gets along well with my daughter.

With the Asian Cup merely days away, did you get any advice from your father?

He didn’t say much. Since I’m not in my top physical shape, he just told me to take good care of my body.”

Players like Son Heung-min and Ji Dong-won, among others, remind me a lot of you back in 2002. What do you think?

I agree. They are players with loads of potential and they’re like a breath of fresh air for football fans. I didn’t develop into the type of player many expected, but Heung-min has made his debut in the German Bundesliga at a young age and has already scored three goals. I’m sure he will develop into a fine player.

What do you think are some of the positives and negatives about the current Asian Cup squad?

We’re at a transitional period. We have a lot of young players who have replaced veterans. The potential of these young players is a big plus for the national team, but it’s also something we need to approach with caution. Young players can play beyond expectations once the team starts playing well and their confidence is up. However, if the entire team begins to struggle, they lack the experience to pull through during tough stretches.

I think the opening match of the tourney against Bahrain will be the key. It will be important for the young players to gain confidence in the game. Veterans like myself need to carry the pressure of expectations that come with competing in such tourneys. The younger players need to learn to enjoy themselves. With the young players at our disposal, we are fully capable of winning the tourney.