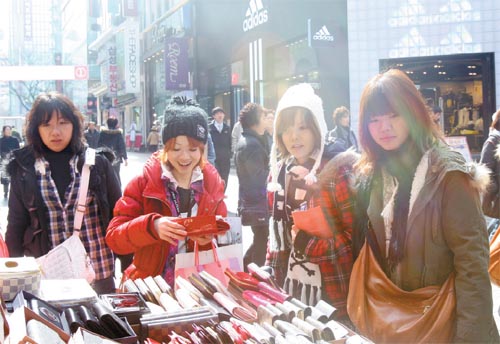 Foreign visitors to Korea last winter browse wallets at a street vendor in Myeong-dong, central Seoul. Myeong-dong is a hot spot for shoppers both foreign and local. By Yang Gwang-sam


Korea will turn into a shoppers’ haven for 50 days during the 2011 Korea Grand Sale, launched by the Visit Korea Committee - a group under the Korea Tourism Organization.

The event is aimed at foreign visitors to Korea and offers discounts and other perks at 14,000 venues around the country. The event, now in its third year, starts Monday and continues to Feb. 28. Event organizers say they hope the event will become one of Asia’s major shopping festivals in the future.

The Korea Tourism Organization announced this month that the number of foreign visitors to Korea this year is expected to rise 12.5 percent compared to last year’s figure of 8.8 million.

The KTO’s data also showed that the largest number of visitors to Korea last year were from Japan, representing 34 percent of all visitors to the country, followed by Chinese tourists at 21 percent.

Each weekend during the sale the Visit Korea Committee will hold photo shoots with Pororo, a television cartoon character and the committee’s promotional mascot. In addition, isitors to Yongsan, Insa-dong and Dongdaemun - areas that are particularly popular among foreign tourists - will be able to play traditional games as well as sample Korean tea and desserts.

For seven days starting Monday, Incheon International Airport will hold a prize drawing and give away vouchers for hotel accommodations and souvenirs as well as tickets to cultural events.

At the Korea Grand Sale’s opening ceremony on Jan. 14 in Myeong-dong, central Seoul, there will be a variety of street performances and other promotional events.

Actress Choi Ji-woo is the honorary ambassador for this year’s event.

“The 2011 Korea Grand Sale aims to provide an extended amount of comfort and shopping opportunities for foreigners visiting Korea, through which they can become aware of a new side of the country,” said Noh Yeong-wu, director of the Visit Korea Committee.