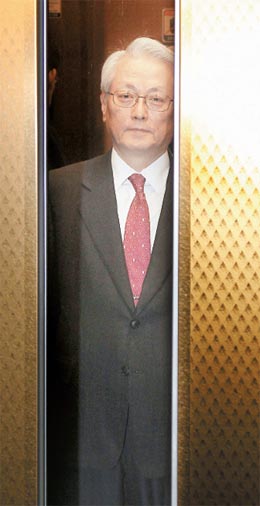 Chung Tong-gi, the nominee to head the Board of Audit and Inspection, reports yesterday to work at a temporary office for cabinet nominees in Tongui-dong, Seoul. [YONHAP]

Following the JoongAng Ilbo’s report that the president’s nominee to head the Board of Audit and Inspection once earned 100 million won ($89,382) a month at a law firm, both ruling and opposition lawmakers demanded yesterday that Chung Tong-gi bow out.

President Lee Myung-bak on Wednesday submitted a request to the National Assembly to hold confirmation hearings for Chung and his nominees for culture and knowledge economy ministers. In his request, Lee said, “Chung has consistently maintained strong ethics and transparency and performed his duty based on his expertise, fairness and conviction, unshaken by outside pressure.”

Chung also submitted a report to the legislature stating that he and his wife, mother and eldest daughter own nearly 2.34 billion won in assets.

According to yesterday’s JoongAng Ilbo exclusive, Chung had received a monthly salary of 100 million won while working for a law firm after he ended his career as a prosecutor in November 2007. Six days after retiring as a prosecutor, Chung was hired by Barun Law and received 690 million won for seven months of service until Lee appointed him as his senior secretary for civil affairs in June 2008.

“President Lee high-handedly nominated Chung for the post,” Sohn Hak-kyu, chairman of the Democratic Party, said yesterday. Sohn said that Chung, as senior secretary for civil affairs, had been behind many of the Lee government’s political plots and that the chairman of the Board of Audit and Inspection had to be independent and neutral.

“President Roh Moo-hyun’s death came amidst this administration’s political retaliation against him,” Sohn said. “How dare Lee appoint Chung to head the Board of Audit and Inspection? It is a direct challenge to the constitutional spirit and democracy.”

Park Jie-won, the DP’s floor leader, made an even more blunt attack. “Chung used to receive 100 million won a month from a large law firm after his prosecution career,” Park said. “Isn’t this based on the evil practice of the legal community through which former prosecutors and judges receive favorable treatment during trials when they became lawyers?”

“The head of the Board of Audit and Inspection should be responsible for monitoring such practices,” Park said. “How can Chung possibly perform those duties after what he has done?”

The ruling Grand National Party appeared to be reluctant to support the former prosecutor and presidential aide, and some members were plainly opposed to the appointment. “Chung is unfit to serve in the post,” GNP Representative Joo Seong-young told the JoongAng Ilbo. “He should bow out before the confirmation hearing takes place.”

Other lawmakers said that even if Chung got through the confirmation process, he could become a serious liability for the GNP’s image.

As pressure for his withdrawal grew, Chung said he was perplexed about the situation. “I received the salary legitimately while working for the law firm,” Chung said. “But I realize the amount is high from the view of working-class people.”

Chung also said he paid 300 million won of his salary in taxes, reducing his net income for the seven months to 390 million won, adding that he would explain the numbers more clearly at his confirmation hearing.

Blue House officials said yesterday that they had been aware of Chung’s salary, but they didn’t foresee a problem because it was legitimate.

After graduating from Hanyang University, Chung passed the bar exam in 1976 and completed his judicial training in 1978. After a teaching stint at Jeonju University’s law school, he joined the Seoul Northern District Prosecutors’ Office in 1981. From August 2006 to February 2007 he served as the vice justice minister. After ending his prosecution career as deputy head of the Supreme Public Prosecutors’ Office in November 2007, Chung worked for Barun Law until he went to the Blue House as senior secretary to the president for civil affairs in June 2008, serving until August 2009.

The GNP and DP yesterday agreed to form a 13-member panel for Chung’s confirmation hearing. Seven Grand Nationals, four Democrats and two more opposition lawmakers will verify Chung’s qualifications at the hearing, which will take place on Jan. 19 and 20.