Fun ways to forget the cold

Fun ways to forget the cold 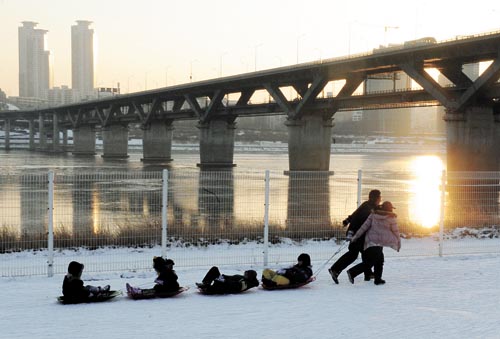 
There are plenty of ways to work off the winter chill in Korea. But one of the best ways is to enjoy the numerous skating rinks, sledding parks and ice sledding rinks in Seoul and Gyeonggi.

Here are a few of the major facilities. 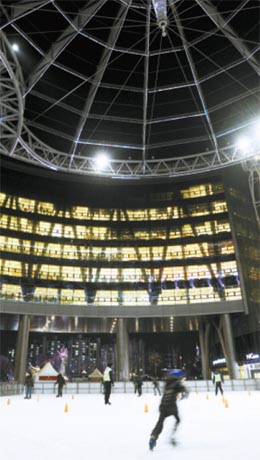 There is a multitude of skating rinks in Seoul offering lessons in ice hockey, speed skating and figure skating. Some of the city’s ice rinks include: Garden 5 Ice skating rink [NEWSIS]

The Garden 5 ice rink in Songpa, southern Seoul, which opened early this month, has brilliant night lighting thanks to its LED light fixtures. The rink is decorated with photographs of artists who participated in Garden 5’s performance and exhibition series in 2010, including conductor Gum Nan-se, singer-actress Jeon Soo-kyeong, tenor Lim Tae-kyung and installation artist Han Jem-ma. Also exhibited are the winning artworks from the Imagine Art Festival, held by Garden 5 last month. 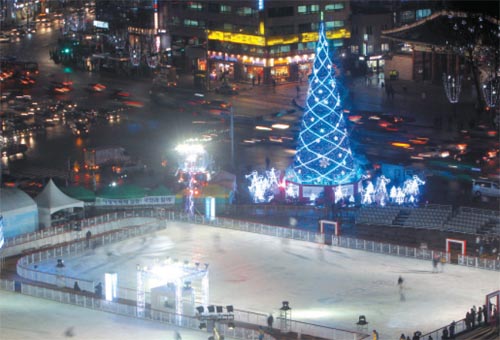 With City Hall to the north and Deoksu Palace to the west, this skating rink in the heart of Seoul is as picturesque as it is popular. The rink now has a lounge and has upgraded its restrooms. 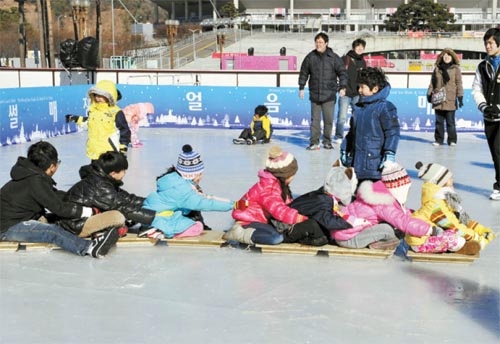 This rink is less crowded than most, making for a more pleasant skating experience. In addition to ice skating, the facility also has a sledding park for hours of afternoon fun.

The rink is open from 10 a.m. to 10 p.m. Monday to Sunday until Feb. 13. Admission and skate and sled rentals cost 1,000 won each. Children under four are not allowed on the ice.

The rink offers skating lessons for beginners and those at intermediate and advanced levels for 50,000 won, including skate rentals. There are five lessons in each session. Call (02) 308-7442.

The indoor rink at Tancheon Sports Complex in Seongnam, Gyeonggi, offers skating activities from speed skating to figure skating and even ice hockey.

The indoor ice rink at Bundang Olympic Sports Center is open all year long. Its facilities include a lounge, changing rooms, a skate-blade repair shop and a skate rental shop.

Every winter, the park covers its outdoor swimming pool and it becomes part of the park’s 35-meter sledding course.

The park has other facilities to keep visitors busy, including a 3-D movie theater that seats 100 people, and a ride called “air bounce,” which is part slide, part maze and part ball pool. There is also a snack bar and rest area for hungry sledders. Security guards and medical personnel are on duty to provide help if needed.

In addition to offering an introduction to Korean culture, the Korean Folk Village has a 130-meter-long adult course and an 80-meter-long children’s course.

Young or old, anyone can enjoy sledding at Everland’s Snow Buster theme park in Yongin, Gyeonggi. There are three different courses to choose from.

Those with smartphones can get an application that shows the waiting time for each course.

The Cheoin District in the city of Yongin has five ice sledding rinks, two of which are currently closed because of concerns about foot-and-mouth disease. A sled and thermos are provided for free by the rinks. Call (031) 324-5051.

Seoul Land in Gwacheon, Gyeonggi, has an ice sled rink that is 2,000-square-meters wide. Admission and sled rentals are free for Seoul Land visitors. Call (02) 509-6000.