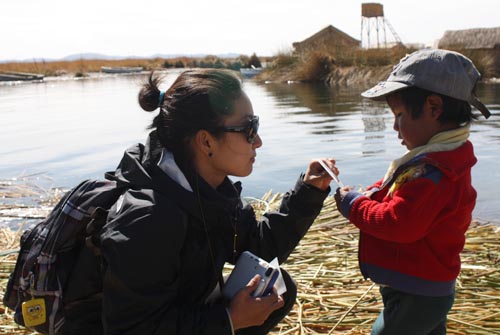 Woo Eun-jeong, 26, shares a photo with a child she met last year on the shore of Lake Titikaka in Peru. Her visit to the area was part of a trip around the world she gave herself after passing the Korean bar examination. The trip, she said, changed her life and career goals. [YONHAP]


While she was living in a small room at a gosiwon, a dormitory-like facility for people who want to focus on studying, Woo Eun-jeong, 26, tacked a world map to the wall and promised she would treat herself to a trip around the world if she passed the Korean bar exam.

Last year, she was able to fulfill her promise when she set off on a 319-day trip that took her to 24 countries in Africa, the Middle East, Europe and South America.

The trip, she said, changed her life.

Woo passed the bar in 2008 when she was a junior in the law program at Ewha Womans University. But instead of entering the Judicial Research and Training Institute straight away, she spent 2009 earning money for the trip and she took off to travel the world, deferring her entry to the Judicial Research and Training Institute twice.

The JRTI aims to further the education of those who have passed the Korean bar examination before entering the legal profession, according to its Web site.

“Ever since I saw the starving children in Africa, my dream of becoming a legal professional working for a global NGO has grown stronger,” Woo said.

She said she doesn’t regret choosing travel over entering the JRTI right away, even though competition for jobs in the legal profession grows more fierce every year.

“Through traveling, I was able to break free from the prejudice and stereotypes I had of the world and I promised myself I would become a conscientious lawyer,” said Woo, who will enter from the JRTI in March.

After passing the bar, Woo saved 10 million won ($8,906) by working as an assistant teacher at a cram school during the day and a bartender at night. She left Seoul last January.

Her first destination was South Africa. She then went to Kenya and Ethiopia and moved on to countries in the Middle East and Europe. The final continent she visited was South America, where she traveled to Columbia, Brazil and Argentina. She also went to Cuba before returning to Seoul on Dec. 10.

Woo said that some experiences still linger in her memory, especially those of meeting a starving 17-year-old Ethiopian girl who could not even muster the strength to ask for food, the four days of ardent hospitality she received from a local in Tunisia and meeting Cuban people living on only 30,000 to 40,000 won a month.

“When I was saying goodbye to the Ethiopian girl, I gave her $200 and told her never to give up on her dream of becoming a doctor,” Woo said.

She added that seeing so many people fighting with poverty every single day, allowed her “to attain a modest heart.” And her goal of working for a global NGO solidified.

“I am sure there is a domain in which only legal professionals can operate to help those around the world who are suffering from hunger. I want to become a legal professional who takes different perspectives into consideration in everything I do,” Woo said.