Gagman Yoon hangs up his fishnets

Gagman Yoon hangs up his fishnets

Yoon Hyung-bin, who played Wangbiho, said goodbye to the character after a nearly three-year run. The last Wangbiho sketch aired on Jan. 2. By Kim Seong-ryong


Some loved him and others hated him, but few would claim that the character Wangbiho was not entertaining.

At the end of every “Gag Concert,” a comedy television show, the character dressed in drag would shout, “Who says the show’s over?” before walking on stage and launching a barrage of sarcastic comments at the show’s celebrity guests.

He was a master of crossing the line. Partly because of that, Wangbiho has picked up his fair share of admirers and detractors over the years. Wangbiho means “truly unpleasant” in Korean.

Last month, comedian Yoon Hyung-bin, the man behind Wangbiho, hung up his fishnet stockings for good after a 32-month run. The last Wangbiho sketch aired on Jan. 2.

“I haven’t been this free for years,” said Yoon. “In fact, I meant to quit last autumn - I felt like I was falling into a grind.”

Wangbiho’s role on “Gag Concert” was to appear on stage at the end of each segment and pick on guests, making sarcastic - sometimes mean - comments. His targets were celebrities who were invited to watch the show.

Yoon has been credited with popularizing the sarcastic, mocking trend that comedians ran with since 2008. 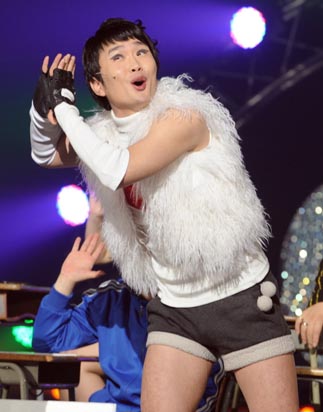 A scene from a Wangbiho sketch during “Gag Concert.” Provided by KBS

Yoon’s first targets were idol boy bands TVXQ and Super Junior, whose fans tend to be on the sensitive side.

“As I expected, I was attacked by their fans,” said Yoon. “It was in the grey area between what was acceptable and what was over the line. The producer of the show even worried that the character’s poor reception among some people could make things harder for me later in my career.”

Nevertheless, it did not take long for Wangbiho to gain a following. His character came at a time when people had been bored with virtuous and preachy celebrities who were being paraded out on “entertainment” shows. Wangbiho would open the closet of celebrities to reveal their dirty laundry - but only the dirty laundry celebrities wanted revealed, of course.

As the sketch became a mainstay of the show, some celebrities even sought Yoon out, asking him to make them his next target. But Yoon said he would refuse if he thought the attention would be gratuitous.

His only other rule: Yoon said he would pepper the target with a barrage of hilarious ridicule, but would leave room for them to defend themselves.

“Once, idol band FT Island came to see the show and I said, ‘I have heard of lip syncing, but not hand-syncing [pretending to play instruments on the stage],’” said Yoon. “But I added on, ‘Yes, I know, the broadcasting conditions are not ideal for live music.’ Celebrities enjoyed my comments, rather than being offended.”

Demonstrating the sketch’s popularity among a certain demographic, politicians over the years asked to appear on the show, but Yoon declined them all.

“I cannot make people laugh at material they are not interested in,” said Yoon. “The truth is, younger generations are not interested in politics compared to the old days when there were more political pressures [referring to the student demonstrations of the 1980s]. It is better to talk about a famous celebrity to connect with audiences.”

One of the many reasons Yoon is hanging up his drag costume is a recent shift in trends. Yoon sees people moving to reality shows. He is now appearing on the show “A Man’s Worth.”

“I am tired of making critical comments. Rather than a simple laugh, I want to make people realize the humanistic elements beneath the fun,” he added.