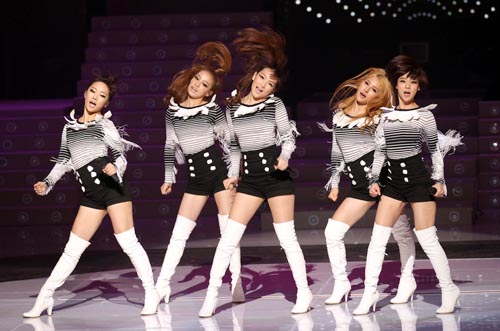 At the Gold Disc Award ceremony in Tokyo Wednesday, arranged by the Recording Industry Association of Japan, Kara and Girls’ Generation received the New Artist of the Year awards in international and domestic pop sections, respectively.

Kara, who made its debut with the song “Mister” in August, has been a hit in Japan, selling over 140,000 copies of the second single “Girls’ Talk.”

Nine-member Girls’ Generation’s single album “Gee” reached No. 1 in Japan’s Oricon Chart, and their other hit songs have sold over 120,000 copies in Japan.

The Japan Gold Disc Awards were first launched in 1987 to recognize outstanding artists and works that have contributed to the Japanese recording industry. Awards are based on sales from Jan. 1 to Oct. 31 of a year.

The top prize, Artist of the Year, went to Japan’s idol group Arashi for the second straight year.