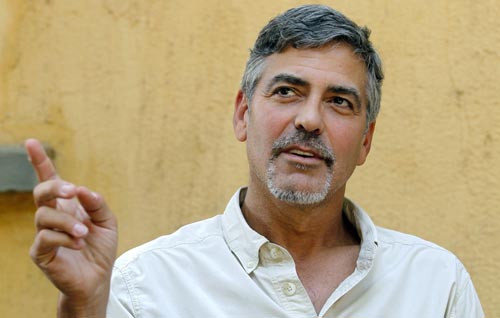 George Clooney is using his celebrity to draw attention to a vote in Sudan. [REUTERS/YONHAP]


JUBA, Sudan - How do you get a long-suffering but little-known slice of Africa on the White House agenda and onto television screens in the U.S.? George Clooney knows how.

Humble, self-effacing and dressed for safari, the Hollywood star and former Sexiest Man Alive was in the scruffy, straw-hut capital of Southern Sudan on Saturday to draw attention to the region’s week-long independence referendum.

The vote, which begins Sunday, is likely to create the world’s newest nation. Clooney is working to help the region avoid a backslide toward war.

In picking a cause and roughing it in a developing country, Clooney is hardly alone. Celebrities are shining their star power on the poor, the war-weary and the disaster-prone more than ever.

“Our job is trying to keep this on the front burner of the news,” Clooney told The Associated Press. “I’m the son of newsman. I understand how hard it is to keep stories on the front of news, and sometimes entertainment and news can be meshed together if you do it properly.”

Clooney has had two meetings with President Barack Obama on Sudan and has persuaded reporters from outlets like NBC, CNN and Newsweek to focus on the country. He says he doesn’t know how much his efforts help, but that every bit counts.

“It’s important as any other individual in the country or in the world to engage in life and in the world,” he continued. “You know, a celebrity is absolutely no different. I wasn’t a celebrity my whole life. I was an individual citizen for most of it, an unemployed citizen for a lot of it. .?.?. I don’t forfeit that just because I’ve happened to get lucky in my career.”

Clooney and Sudan activist John Prendergast helped launched the Satellite Sentinel Project, which will track troop movements in real time in Abyei, a north-south border region where the biggest threat of a return to conflict exists. The two wrote that they want to cast a spotlight on the hot spots on the border to help prevent Darfur-like atrocities.