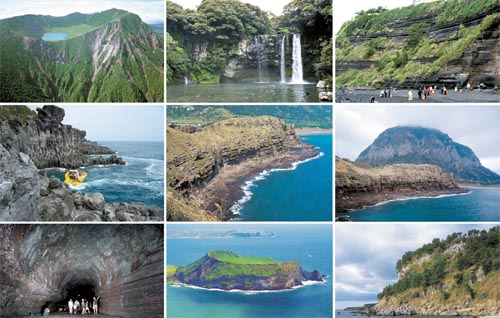 
Jeju Island is battling to become one of the New7Wonders of Nature, vying with other renowned tourist attractions such as the Grand Canyon and the Maldives. Winning the designation would bring the island recognition as a global tourist spot.

“[If Jeju Island is chosen as one of the New7Wonders,] it will elevate Jeju from a budget-travel destination to a rich tourist attraction,” said Jeju Governor Woo Geun-min.

The New7Wonders Foundation, established in 2001, is a Swiss NGO that exists to conserve and promote world heritage sites. In 2007, its New7Wonders of the World campaign drew 100 million netizens who cast votes via telephone or Internet to rank the seven top heritage sites in the world.

In the second round of voting for New7Wonders of Nature, which concluded in 2009, 77 sites out of more than 440, representing countries all over the world, were chosen based on the votes cast and the opinions of a panel of experts. Since then, the list has been narrowed to 28 contenders. The final round of voting continues until Nov. 10, and the seven winners will be announced Nov. 11.

In Korea, the effort to promote Jeju Island as a New7Wonders site is currently in full swing. The National Commission for Promotion of Jeju was established on Dec. 13 with former Prime Minister Chung Un-chan as chairman.

On Thursday, 300 days before last day of voting, the committee launched its own campaign to promote Jeju’s candidacy at the Haevichi Hotel in Seogwipo, Jeju.

“This campaign should be a global festival for preserving the natural environment,” Chung said in his opening speech. “Of the 28 finalists, Jeju is the only candidate where people, nature, culture and prehistoric heritage harmoniously coexist in a single location.”

Jeju Island has been granted triple crowns in the natural and scientific fields by Unesco: it won designation as a Biosphere Reserve in 2002, induction to the World Natural Heritage List in 2007, and designation as a Global Geopark in 2010.

Among them, Mount Halla, Seongsan Ilchulbong Peak and Manjanggul Cave were added to the Unesco World Natural Heritage List in 2007. On top of that, Mount Halla was designated as a Unesco Biosphere Reserve in 2002. Jeju is the only place in East Asia to make the final list of 28 candidates. Other sites in Asia that were on the earlier list include the Yangtze River in China, Mount Fuji in Japan and Mount Baekdu and Kumgang in North Korea.