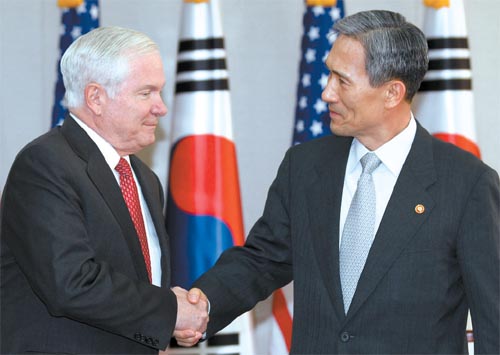 During a visit to Seoul to meet President Lee Myung-bak and Minister of National Defense Kim Kwan-jin, Gates also called for a halt to North Korea’s “dangerous provocations” and said six-party talks could resume with “productive negotiations, conducted in good faith.”

In opening remarks before 40 minutes of bilateral talks, Gates said the world could diplomatically engage North Korea - but only after Pyongyang and Seoul have talks.

In the meeting with Kim, Gates said that he told leaders in Beijing that South Korean public opinion will demand a strong response to any further attack from North Korea.

With his Seoul stop, Gates wrapped up a weeklong trip to China, Japan and South Korea.

After a meeting between Gates and Kim, a ministry official said the two came to an understanding on three preconditions the North should fulfill before beginning bilateral talks between the two Koreas.

South Korea has demanded that North Korea take responsibility for the Cheonan sinking and the Yeonpyeong Island shelling, guarantee the prevention of further attacks, and make sincere moves toward denuclearization.

“In the case of another attack, Kim said a strong retaliation would be inevitable and I believe Gates fully understood that,” said the official.

In a later meeting, Gates and Lee spoke on the North Korean nuclear issue and mutual cooperation among related countries for peace and safety in Northeast Asia.

President Lee was quoted by his spokeswoman as saying that he believed North Korea had been “continuously developing” weapons, “seeing how North Korea openly revealed its uranium enrichment program and long-range ballistic missiles.”

Lee also underscored North Korea’s goal to become a “strong and prosperous country” by 2012, and said it was therefore crucial for the two Koreas to resolve their disagreements this year, possibly through talks, which North Korea has been requesting since the beginning of the year.

Gates made stops in Beijing and Tokyo to meet with officials and emphasized the roles the countries should play in stopping North Korea from making additional attacks on the South.

In Beijing, Gates urged China to control North Korea, which he called a “direct threat” to the U.S., and said the North could develop an intercontinental ballistic missile in five years.