Actors honored with a theater

Actors honored with a theater 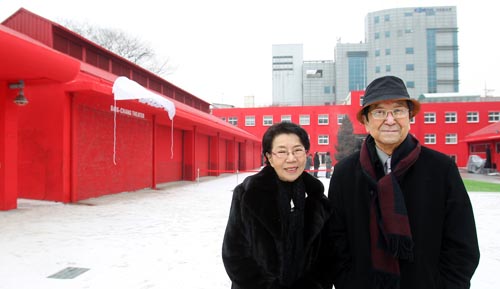 Baik Soung-hee, left, and Chang Min-ho, pose in December, in front of the new theater that bears their name in Seogye-dong, Yongsan District, central Seoul. By Kim Tae-sung


Most people can tell you the name of at least one film or television actor they like, or the name of their favorite singer, but not many people are able to recall the name of a single stage actor.

Baik Soung-hee and Chang Min-ho may soon become the exception to the rule.

The two were recently honored by the government with a new theater that has been named after them.

It is the first time in the history of Korean theater that the government has named a theater after two performers who are still alive and only the second time any national theater has been named after any person, living or dead.

The Baik-Chang Theater was opened at a ceremony on Dec. 27 that honored two dozen performers, including the two actors.

It was clear that others in the theater industry were shocked and pleased with the news of the theater’s dedication, including veteran actress Sohn Sook.

“I never dreamed I would witness a day like this in my lifetime,” Sohn said.

Baik, 85, and Chang, 86, are legends of modern theater in Korea, and they have appeared in more than 300 productions together.

Last year, as members of the National Theater Company of Korea, Baik and Chang starred in a piece titled “Tom Tom Nangrang Tom,” which is based on a folktale about Princess Nangnang.

The two actors have a close working relationship that is in some ways like marriage.

“Baik knows my thoughts and feelings even better than my wife,” Chang said.

The two veterans say that it is this close relationship that has kept them going through the years.

Baik also has a strict fitness regimen - she does yoga every morning. The practice has helped her maintain her straight posture, which led her friends to give her the nickname “Soung-hee the Straight.”

Chung also has a nickname, “Ultimate Memory Man,” given to him by his fellow actors for his remarkable ability to memorize his lines.

In Korea, only one other facility is named after a person - the Yi Hae-rang Art Theater at Dongguk University, which opened in 2008.

The theater had originally been proposed as the Chang-Baik Theater because Chang is a year older than Baik, but Chang objected, saying it should be “ladies first.”

The Ministry of Culture, Sports and Tourism is hoping its designation will serve as an inspiration to the next generation of artists.

“We hope [the opening of Baik-Chang Theater] will encourage young artists to create more works,” Kim Young-san, an official at the ministry, said at the opening ceremony.

The new Baik-Chang Theater is located on the grounds of the former transportation corps of Defense Security Command.

Actors welcomed the former military institution’s conversion into a home for the arts.

“It is significant that a symbol of authoritarianism in the heart of Seoul has become a place for culture,” said Woo Sang-jeon, an actor with the National Theater Company of Korea.

Culture Minister Yu In-chon echoed his words when he said, “The opening of Baik-Chang Theater is not just a theater-industry matter, it is the first step toward putting a spotlight on the elderly in our society as we ruminate on the traditions that have been neglected in the process of rapid development.”

The first play to be presented at Baik-Chang Theater will be “Snow in March,” according to the National Theater Association.

It will star Baik and Chang as wife and husband.

The play, to be directed by Son Jin-chaek of the National Theater Company, will premiere in March.