Director of thrillers finds softer side

Director of thrillers finds softer side

Director Kang Woo-suk is back with a heartwarming film about a baseball team in “GLove.” By Kim Sang-seon


After directing last year’s hit thriller “Moss,” veteran filmmaker Kang Woo-suk is back with another film that already appears destined for blockbuster status. This time, however, the director shows his softer side with a dramatic film about a baseball team with a lot of heart in “GLove.”

Throughout the years, Kang’s specialty has been intense thrillers such as “Silmido” (2003) and the “Public Enemy” trilogy. He has won numerous awards, including the 47th Daejong Film Award for “Moss,” the grand prize at the 40th Paek Sang Arts Awards in 2004 and the director’s award at the 23rd Blue Dragon Film Awards.

But Kang’s new movie is his first human drama. “GLove” tells the story of a baseball team whose members are all hearing-impaired. It is based on the true story of the Seongsim School baseball team in Chungju, North Chungcheong. They are guided by their coach Kim Sang-nam (Jung Jae-young), who has been banned from professional baseball and the school music teacher Joo-won (You Sun).

“GLove” will be released Thursday in theaters nationwide.


Q. Audiences were crazy for hard-core thrillers last year, but they seem to have grown tired of them. Were you trying to read the public?

A. Not necessarily. It was more like I was with them, moving from brutal thrillers to a human drama.

I broke down while I was directing “Moss.” I was always tense and angry. But it was different when I was shooting “How To Kill My Wife” (1994), “Two Cops” (1993) and “Happiness Has Nothing to Do with Student Records” (1989). I was happy and the staff was all having fun on the set.

I think I started shifting my perspective when I was shooting “Public Enemy” in 2002, which was about parricide. Unconsciously, I was looking for something stronger and more stimulating. Then when I grew tired of that, I started trying to make a bigger impact, but it came out as fear and anger.

When I was directing “Moss,” I received the script for “GLove” and I found it very touching. It reminded me of the time during “Two Cops” when the staff was laughing nonstop and making outtake reels. 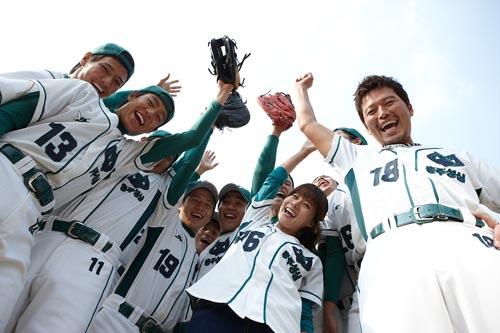 
But in an interview for “Moss” you said the movie was a turning point for you.

Yes, as a director it was definitely a challenge. But it wasn’t a movie that made me happy. I watched the movie “Blind Side” starring Sandra Bullock while I was preparing for “Moss.” The movie made me happy all day long. Scene by scene, the movie touches the audience without any grotesque or brutal setups.

I think one of the reasons why “Moss” wasn’t able to attract any more than 3,550,000 viewers was because it did not move audiences and many people felt it was too scary.

Why do you think so much money was invested in brutal thrillers in the past year?

Most of the scripts I’ve been receiving have been about murder. Even melodramatic films have some kind of murder twist. It’s abnormal. I think it shows that writers are running out of material.

Filmmakers are focusing too much on creating dramatic stories and disregarding reality. But a filmmaker can find a variety of stories just by paying attention to the world we live in and the one we might have in the future.

(For example), “Happiness Has Nothing to Do with Student Records” came from a real story about a student who committed suicide. The title of the film comes from the last words of his suicide note. Statistics show that more than 100 students each year commit suicide because of stress about their grades.

My debut 1988 film, “Sweet Brides,” was based on another true story of a young man from the countryside who committed suicide. It was about the town, the neighborhood and the world people lived in. A lot of people cried and laughed because they were able to connect to the story.

When you first read the script (for “GLove”), you said you wondered whether hearing-impaired people could really play baseball. Then you watched a documentary on KBS called “Shoot at the Sun.”

I wondered why a story like that had not yet been made into a film. As a story about hope and courage, it’s very moving.

Were there any particularly moving moments you can recall from when you were shooting the film?

In one scene, the team loses 32-0, and the coach makes the whole team run back to school. The kids let out the anger and frustration they feel deep inside.

I couldn’t stand up after we shot the scene. The person next to me was sobbing and other staff members were tearing up.

Are there any points in the movie when the audience is likely to cry?

I cried twice while I was working on the continuity. During the scene I talked about a moment ago and another time during a scene in which Myung-jae (Jang Ki-bum) - who had to end his career as a baseball player because of his sudden hearing loss - begs the coach to let him pitch. I thought if I was moved, the audience would be too. The scene shows the team willing themselves to get back up on their feet.

But none of the scenes were calculated. I just wanted to interact with the audience.

If “GLove” becomes a hit, do you think it can be attributed to the idea that people, during times of economic difficulty, want a heartwarming story to watch?

People do have a thirst for heartwarming movies. Every day, the news is about fights, murder and corruption.

People talk about family because there’s no place like home, and stories about elderly ladies who save up their money and donate it to charity are also moving. We need these pure sensations.

Some people have said that you are copying the kinds of films that are already out there. They point out that you are dealing with familiar material.

Last night at the premiere, I heard there were middle-aged men crying during the entire movie and that they were embarrassed when the lights came on. If my message was delivered to them, that’s good enough for me. For me, it’s more important to make people feel something rather than worry about what everyone else is doing.

The kids on the Seongsim School team gave me a lot of courage and helped me through some difficult times. They have brought me back to the days when I first entered the film business. In future films, I hope audiences see that I’m not getting old but that I’ve broadened my perspective.