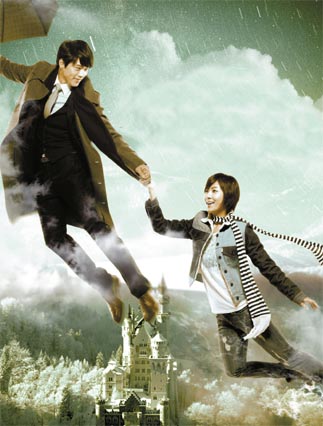 The promotional poster for “Secret Garden,” which aired on SBS from November 2010 to Sunday. The drama was an updated take on the Cinderalla story, but acknowledged the reality of class division and the impossibility of its love plot. Provided by the JoongAng Ilbo

The drama “Secret Garden,” which ended on Sunday, achieved something rare in the candy-coated world of Korean drama. Not only was it popular, it elevated the banal Cinderella story to another level and created a new Cinderella for the modern age.

Throughout its run, the fantasy drama hooked viewers with its fantastic plot, in which the leading characters switch bodies, and attractive leading actors. Viewer ratings peaked at 35.2 percent for the last episode and averaged 30 percent for the series as a whole.

But the most intriguing aspect about the drama, aside from its highly unrealistic plot, is the return of the Cinderella narrative, which has had a long history in Korean drama.

Of course, the classic fairy tale appeals across geographic and cultural borders. But the merit of the Cinderella story as a plot device lies in its universality, allowing for numerous variations. Today there is a more modern Cinderella who has emerged in Korea - the woman who tries to overcome class and gender stereotypes.

The success of “Secret Garden” is based not only on its popularity as a modern Cinderella tale but also for the way the Cinderella character has evolved through time.


When Cinderella was a man

There weren’t many Cinderella stories in Korean movies and dramas until the middle of the 20th century. As the movie “Arirang” (1926) by director Na Woon-kyu showed, most of the stories were about frustrated men and their miserable wives.

In the 1960s, during the nation’s push for development, the dream of becoming Cinderella was reserved for men, not women. Most of the teen movies made during this period, including “The Barefooted Young” (1964) starring Shin Sung-il and Um Aing-ran, showed a love story between a girl from a rich family and a dirt-poor man.

In reality, those days were tough for everyone, so the dream of becoming Cinderella was out of the question for both men and women alike. And the dream of marrying “the one” could only be seen in romance comics.

But in the 1990s, when the Korean economy had grown, the Cinderella story returned.

The first drama with a Cinderella plot was “Love into Your Heart” in 1994. The leading female character, however, was somewhat different from the original, shy girl we know as Cinderella, because by this time, women had become more confident and plucky. Thus, the Cinderella in these dramas had the optimism of Cinderella and the ambition and resilience of Candy, a Japanese anime character.

“Love into Your Heart” paved the way, and since then, many Korean dramas have adopted the Cinderella plot.

In addition, the impact of both “Love into Your Heart” and the Asian financial crisis of 1997 created a new kind of Cinderella story in which the evil female character is given a prominent role in the drama.

As opposed to previous dramas that had focused solely on the “good” female character pursuing love and a career, the new dramas showed the protagonist competing with an “evil” antagonist to achieve success, as represented by dramas such as “Tomato” (1999) and “All About Eve” (2000). But regardless of whether the female characters are good-hearted or wicked, the bigger point is that both types of women are tenacious in realizing their goals, perhaps a byproduct of the pressure to survive in tough times. The male character, meanwhile, plays the role of her biggest supporter while also serving as a role model for the female character to emulate.

As such, the women in Cinderella stories from the era of the financial crisis were aggressive in reaching their goals, and being successful in their careers was important.

To put it another way, the young women raised in the ’90s who grew up with relatively less gender discrimination than their predecessors refused to give up on success even in times of difficulty.

Even after the Asian financial crisis, life did not immediately improve for women - in dramas or in real life. Hopeful romantic comedies like “Cat on the Roof” (2003) were popular, but their success did not last long and it wasn’t long before two completely new, and contradictory, types of Cinderella characters appeared.

Beginning in 2004, the Cinderellas in soap operas and movies were not the strong-willed women of the ’90s who were dashing ahead to achieve success as sophisticated designers or anchors.

With the public having realized how unrealistic the dream of having it all was, Cinderella became a softer, more realistic character. And there were actually two contrasting Cinderellas in the dramas of this time.

In “Lovers in Paris,” the main female character, who is attractive but doesn’t have much ambition, falls in love with a rich man. Therefore, the plot turns the drama into a sugary fairy tale. In contrast, the female character in “What Happened in Bali” is a woman who chases after money and is eventually murdered by the man she loves. She neither has money nor is well-educated and gets by working as a travel guide and a hostess at a noraebang (Korean singing room).

Although the two dramas have different plots and characters, both female characters lack the confidence of their counterparts from the dramas of the 1990s, who dreamed of pursuing a professional career and having a man at their side.

As the glamorous fantasy of ’90s dramas faded away, people began to enjoy the more down-to-earth version of Cinderella, such as the character in “My Name is Kim Sam-soon” from 2005, who is an average girl.

The other trend that emerged during this period was far more absurd stories of romance between a frivolous girl and a rich man.

Dramas “Sweet 18” (2004), “Full House” (2004), “Princess Hours” (2006), “Boys over Flowers” (2006) and “You’re Beautiful” (2009) all portray a childish girl getting married to or living with a man - be they a prosecutor from a prestigious family, a celebrity, a prince or the son of a jaebeol (conglomerate) family. The clumsy female character has no desire to pursue a career; with that ambition gone, she seems to have no problems. There is no reality in these dramas because the primary goal is escape.

Underlying the completely unrealistic plot, however, is an amped-up version of the Cinderella story from previous dramas: the main character is a woman who is desperate to become a professional career woman while also elevating her social status through marriage.

What makes this drama enchanting is the fact that it recognizes the impossibility of the dream, while acknowledging the realities of class in society.

Kim Joo-won, a 34-year-old CEO of a department store, is perplexed when he is attracted to Gil Ra-im, a stunt woman who lives in a studio apartment with a monthly rent of 300,000 won ($268). He can’t imagine falling for someone from a different social class.

That made the story completely different from anything that had preceded it because the drama acknowledged for the first time that class differences were real and lines between them impermeable. It is impossible for the two main characters to imagine living in a class that is different from their own, and the drama deals with this by having them switch bodies.

In Korea, socioeconomic stratification has set in, evidenced by the ascent of the third-generation of conglomerate families to power. Against this backdrop, only a small percentage of people can become rich, whether by working or elevating their social status by marriage.

For most people, the plot of “Secret Garden” is too absurd. But the drama updates the Cinderella story by acknowledging reality and breaking through it with a good dose of fantasy.


From prince to prick, drama’s leading men through the years

Cha In-pyo plays a young heir to a conglomerate with a rebellious personality. His character enjoys motorcycles and playing the saxophone, and he falls in love with a poor, undereducated but cheerful woman.

Jang Dong-gun plays the son of a broadcasting company owner. Good-looking and well-mannered, he navigates through the drama’s female characters, who are aggressive and ambitious in achieving success in their careers and love.

Park Sin-yang’s character, as usual, is heir to a conglomerate. Though arrogant and self-confident, he is scarred from his past love life (he’s divorced) and lacks the ability to deal with everyday life, exposing his weaknesses but allowing him to open up to the warm care of others.

Zo In-sung plays the first instance of the egotistical immature prince who also struggles with loneliness. Though his parents have made him join the family company, he does not care for it. His way of showing love is through lavish spending and bothering his significant other.

Ju Ji-hun’s character is an actual prince in this Cinderella story. Arrogant, picky and cold-hearted toward the woman he has been set up to marry by the king and queen, he nevertheless shows dignity becoming of a high-class, well-educated royal.

Lee Min-ho plays the prototypical ill-mannered spoiled brat from a jaebeol family. He flies to New Caledonia on his private jet on weekends and threatens classmates with bankruptcy. But once he opens his heart, he deigns to drink vending machine coffee, just the way his girl likes. 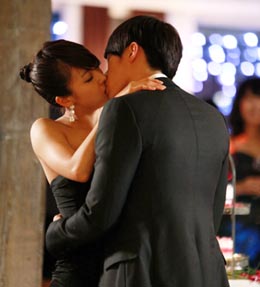 Hyun Bin’s character borrows traits of the jaebeol heir from past dramas, combining arrogance and a sense of entitlement with a gentle manner and good leadership skills. He tries to practice the whole noblesse oblige thing, but not enough to show even a smile to his employees. When he falls in love with a woman from a much different background, he is confused by the fact that something he never thought could happen, well, happened.

*Lee Young-mi is a pop culture critic and she can be reached at ymlee0216@hanmail.net.