Artworks at rest in a sea of innocence

Artworks at rest in a sea of innocence 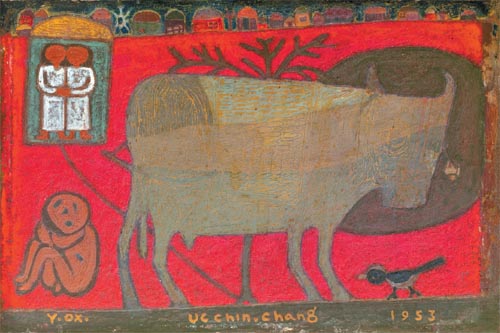 “Ox,” a 1953 oil painting by Chang Ucchin, is now on display at Gallery Hyundai’s retrospective of the artist.


Unlike his contemporaries, Chang Ucchin (1917-1990) painted lighthearted works with a cheerful atmosphere. Most of his paintings feature common objects such as trees, magpies, houses and the sun and moon. The simplicity with which the forms are rendered stands in stark contrast to the primary colors he used to paint them.

Art lovers can now see these works in a large-scale retrospective of the artist that continues until Feb. 27 at Gallery Hyundai, which is located on the art street east of Gyeongbok Palace in central Seoul.

Viewers can also examine the contrast between Chang’s works and those of his peers in an exhibition titled “Blossoms on Yeoliji” at Kim Chong Yung Museum in Pyeongchang-dong, central Seoul, through Feb. 11.

Gallery Hyundai, which last year held a rare large-scale retrospective of Park Soo-keun, another representative modern artist of Korea, is now exhibiting about 70 paintings and drawings by Chang that date from between 1939 and 1990. The exhibition includes five works that are being unveiled to the public for the first time, including the 1953 oil painting “Ox.” 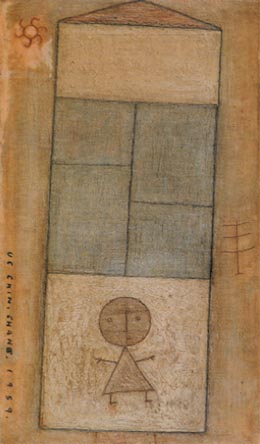 “House and the Child,” a 1959 painting by Chang is now being exhibited at the Kim Chong Yung Museum. Provided by the institutions

Whereas Park’s paintings are known for somber colors and textures that resemble soil and stones, which reflected the hard lives of the Korean people at the time, the paintings by Chang, Park’s contemporary, have a carefree feel and are done in cheery colors and relatively light textures.

Chang’s “Self Portrait,” painted in 1951, “exudes a feeling of peace and nostalgia, as well as a bit of humor, even though it was produced during the Korean War,” according to the Chang Ucchin Foundation, which is operated by the artist’s family.

But his paintings are far from childish optimism.

“His works consistently show some tranquil and transcendental qualities,” said Sung Eun-jin, head of public relations at Gallery Hyundai. “His bereaved family said that he continued to confine himself to his house to paint, even in 1988 when all of Korea was caught up in the excitement of the Summer Olympics.”

Tranquility and transcendence are present in one of the last works he made before his death, “The Night and an Old Man” (1990). In it, an old man in a white gown, who could be the artist himself, floats in the sky, leaving behind on earth all the things he frequently painted - mountains, trees, a house, a magpie and a child.

In this sense, Chang’s paintings resemble the wisdom of those who have reached enlightenment in Zen Buddhism. In fact, he frequently visited Buddhist temples in the 1970s and was later given a Buddhist name, Bi Gong, which means “nonvoid,” by Zen Master Kyong Bong, according to the Chang Ucchin Foundation.

Chang’s paintings can also be seen in an exhibition at the Kim Chong Yung Museum, which was established to commemorate the Korean sculptor, who was another important figure in modern Korean art history. In addition to Chang’s work, the exhibit shows sculptures by Kim (1915-1982) and abstract paintings by Kim Whan-ki (1913-1974), a beloved Korean painter. 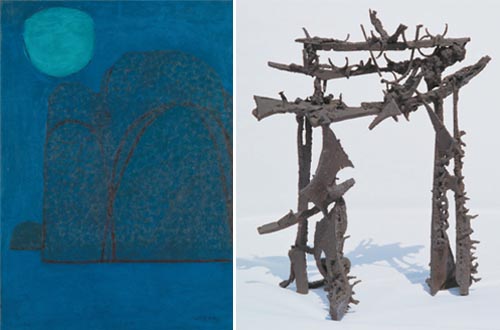 “Mountain and the Moon,” left, by Kim Whanki and “Legend,” right, an iron sculpture by Kim Chong-yung are part of the “Blossoms on Yeoliji” show at the Kim Chong Yung Museum. Provided by the museum


The title of the exhibition is “Blossoms on Yeoliji.” Yeoliji are trees with different roots whose branches become so entangled with one another that they look like one tree.

The three artists became friends and exchanged views about art in the 1950s, when they were all professors of fine arts at Seoul National University, according to the museum.

“They lived in the same period, when the influence of Western modern art was strong in Korea,” Choi Jong-tae, the director of the museum, said. “However, they were not overwhelmed by Western art. Rather, they combined Eastern and Western elements.”