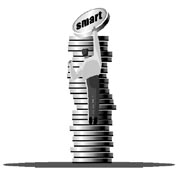 Quitting smoking is a challenge, but if you make a bet, you may have a better chance. A recent experiment showed that heavy smokers who cannot kick the habit can be motivated by money.

The experiment was conducted in Mindanao in the Philippines by the Abdul Latif Jameel Poverty Action Lab at MIT in 2006. During the experiment, done in conjunction with a local bank, 2,000 smokers pledged to quit smoking and set aside the money they would have used to buy cigarettes every month. Six months later, the participants took a urine test, and if it was confirmed that they did not smoke during that period, they would receive the money. Otherwise, the accumulated sum would be donated to charity. The participants showed a surprisingly high rate of success, as the money was a great incentive.

Money is also effective in preventing teenage pregnancy. The state of North Carolina sets aside $1 a day for each girl aged 12 to 18. If they do not get pregnant, the sum will be awarded as a college fund. To win the award, the girls are required to attend a health and sex education class every week. Critics have said that the state is giving rewards for something that should be natural. However, three out of 10 women get pregnant before age 20 in the United States, and the cost of providing welfare to teenage single mothers is more than 9 trillion won ($8 billion) very year. So North Carolina is making a wise investment to reduce risks in advance.

Free welfare is a hot topic in Korea. The general consensus is that benefits should not be provided for free without conditions.

In Mexico, one out of four citizens is a beneficiary of Oportunidades, a social assistance program for the poor. Underprivileged families are provided with money in exchange for ensuring their child has regular health checkups and a school attendance record that is over 85 percent. There is also a nutritional component.

Under the program, children grew taller and healthier, and twice the number of children in rural regions go to high school. Impressed with the results, over 25 countries, including Brazil and Chile, have initiated similar programs. New York City launched a similar program called “Opportunity NYC.”

“Smart welfare” is the global trend today. Instead of coming up with a populist plan to waste taxpayer money, policy makers need to learn from Mexico’s success.