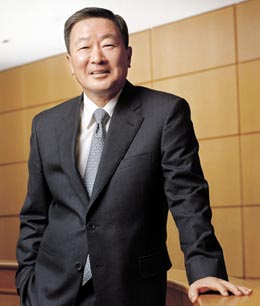 To understand LG Group you first need to understand Koo Bon-moo, 66, the group’s chairman. “Fierce,” “driven” and “competitive” are just a few of the adjectives that describe him and the management ethos of LG, one of largest and oldest family-run conglomerates in Korea.

The characteristics that describe Koo could also be used to describe the men in the Koo family, particularly Koo’s father.

Cha-kyung, Bon-moo’s father, got his training in the country where, as a 25-year-old heir in 1950, he worked, ate and lived with laborers. At 86, he is now LG Group’s honorary chairman.

On this, In-hwoi (1907-1969), Bonmoo’s grandfather and the group’s founder, is quoted as having said, “A blacksmith has to temper metal many times just to make one hoe. It is the only way to make it strong.”

Koo’s management training wasn’t nearly as rigorous. Yet life was not as easy for him as it was for other heirs of business titans. In Korea, the children of high-profile figures have often found ways to dodge their mandatory military service, but Koo accepted his conscription into the Army while attending business school at Yonsei University.

Upon taking office as the chairman of LG Group in 1995, Koo vowed to transform the group into “an excellent company,” not just a good one.

LG’s organizational culture had often been associated with being soft, emphasizing qualities like kindness and harmony.

But Koo’s chairmanship signaled a change, and in subsequent years the company slogans incorporated words like “best” and “No. 1” as well as “competitive” and “fierce.”

It’s been more than 15 years since Koo ascended to the helm of LG Group, but his calls for a progressive spirit remain.

At the company’s Global CEO Strategy Meeting Jan. 13-14, he said, “We no longer have the option of leading the market. We must survive. And in order to do that, the organization has to change.”

When it comes to revamping his group, recruiting and managing talent are foremost in Koo’s mind.

At the meeting earlier this month he vowed to create a pool of 500 talented young employees and provide them with training and support to better foster leadership within the group.

So what leadership quality does Koo think is key?

“Members of [LG Group] should be able to express their opinions freely and effectively,” he is reported to have told his employees. “An LGstyle leader should be able to lead the group with creativity and a free mind.”

Then again, competitiveness is always at the forefront of Koo’s mind. He said in his New Year’s speech that “we should imbue young LG workers a with fierce spirit.”