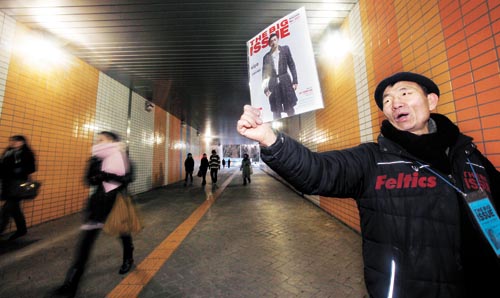 Kim Su-won sells The Big Issue Korea’s January edition in Sinchon last week. The nonprofit group Angels on the Street started publishing it in July as a way to help homeless people get back on their feet. Each copy sells for 3,000 won (2.70 dollars), 1,600 won of which goes to the respective vendor. By Choi Dae-woong


After a chilly night cramped up in his tiny room at a gosiwon (a budget dormitory facility), Kim Su-won put on a long parka and headed off to Sinchon, western Seoul.

Stricken with polio as a child, the 50-year-old said the 142-square-foot room makes it that much harder for him to deal with complications from the disease that still cause him to fidget and move constantly.

Nevertheless, he says it is heaven compared to where he was just a year ago.

“You have no idea what a blessing it is to know that there is a room waiting for you at night,” said Kim, as he sold The Big Issue magazine to passersby on a recent afternoon in the Sinchon area. Kim used to be homeless.

It was one of the coldest days of the year, close to minus 15 degrees Celsius (5 degrees Fahrenheit), but Kim was all smiles holding out January’s issue of The Big Issue Korea.

“Having a place to sleep and money to buy food is what makes us feel human,” he said. As a token of his gratitude, Kim buys a bag of tangerines everyday and hands one to each customer with a issue of the magazine.

It’s been almost seven months since the Korean edition of the London-based magazine was launched. The magazine is the first of its kind here.

Founded in 1991 by John Bird and Gordon Roddick, also the co-founder of The Body Shop, The Big Issue is the world’s biggest street magazine by circulation and provides the homeless a chance to earn money by becoming vendors. Currently, The Big Issue has franchises in nine other countries besides the U.K., including Australia, Japan, Kenya and Korea. 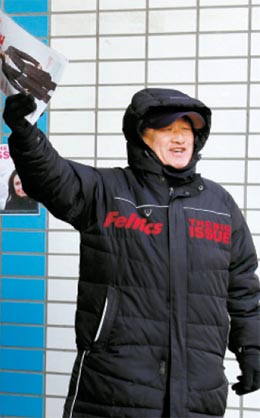 The Korean edition was started by a private, nonprofit group called Angels on the Street, which provided the initial 50 million won ($44,563) start-up money. After signing an MOU with John Bird last April, The Big Issue Korea began selling its first edition in July.

During the first month, 4,200 copies of the magazine were sold. After six months, the number rose almost three-fold. The company says it sold 12,000 copies of its December issue.

By selling an average of 10-30 copies per day, Kim was able to get a room of his own after a month. With about eight hours of labor, Kim says he earns just enough to feed himself, pay for his room (200,000 won a month) and put money into a savings account in the hopes of owning his own place one day.

The Big Issue Korea employees say their ultimate goal is to help homeless people reinstate themselves into mainstream society.

“We are not just giving these people money and saying that’s that,” said Jin Moo-doo, head of sales and marketing at The Big Issue Korea.

“By taking part in an honest day’s work, the vendors gain something more than just money - a chance to take control of their lives and reintegrate into society instead of living as outsiders.”

According to estimates by the International Network of Street Papers, street publications around the globe have helped close to 250,000 homeless people secure some sort of financial stability since 1994.

The Big Issue was originally inspired by Street News, a street newspaper in New York that was sold by the homeless. Established in 1989, it was one of the first street papers in the world and an influential publication when the market started to take off in the U.S. 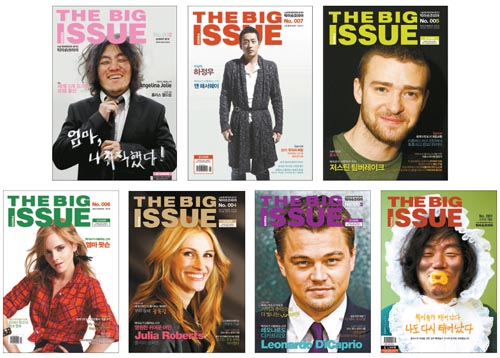 The Big Issue Korea has been on sale for seven months and features foreign and Korean celebrities on its covers.


No jobs for the homeless

The Seoul Metropolitan Government puts the number of homeless in the capital at around 3,000, based on its tally from registered homeless shelters in Seoul. According to local experts, however, the actual number is over 20,000.

The Big Issue Korea started with 15 homeless vendors spread across Seoul. At present, it employs around 30 vendors, but by the end of this year, the magazine aims for 100 vendors in Seoul and Gyeonggi.

One hundred might not sound like a significant number, but Jin says it’s all about coming up with another business paradigm for those who are not a part of mainstream society.

“The only kind of work available to a majority of the homeless in this country is hard, part-time labor at construction sites,” said Jin.

“Try to put yourself in their shoes. You are homeless, starved for days and probably suffer from physical problems after weeks of sleeping outside. After a hard day’s work at the site, you probably can’t go back for days. It’s a vicious cycle.”

The Association of Physicians for Humanism says the annual death rate for homeless people is three times higher than the national average. Liver and lung failure were found to be major causes of death for the homeless.

With the unemployment rate rising in recent years, it is difficult to claw back into mainstream society after becoming homeless, says Jin.

“The real world is brutal. People point fingers at those who don’t work and say they are bad. But they rarely think about why they became that way.”


Anyone can become homeless

With a streak of bad luck, anyone can become homeless, according to social welfare expert Lee Jeong-kyu at the Korean Support Center for the Homeless.

“It’s similar to what people think about horrific news stories. They think it can’t possibly happen to them. The biggest misconception about the homeless is that they are lazy or stupid and they deserve to be that way. It’s easier to think that way for many. But the chilling fact of the matter is, you or I, or virtually anyone, can suddenly become homeless,” he said.

It only took two months for the life of Hong Sam-young - another Big Issue Korea vendor - to unravel.

In 1998, Hong’s wife was diagnosed with late-stage cancer and passed away in May that year.

After his 28-year marriage came to an abrupt end, Hong says he couldn’t even drink a sip of water for a week and tried to kill himself three times in subsequent months.

Soon afterward, he closed down his supermarket and suffered from a string of failed businesses. He eventually became homeless. For 10 years, he slept in parks, homeless centers and at Seoul Station before becoming a vendor for The Big Issue Korea last summer.

“I had no idea I would ever become homeless. It happened so quickly,” said Hong, now 60 years old.

Seoul saw a record number of homeless people in 1999 as well, with over 4,700 homeless in the city’s shelters as of January that year.

“After the Asian financial crisis, many of the middle class suddenly became lower-class. Before the late 1990s, the homeless in Korea were mainly older men or disabled people.

However, after the financial crisis, many women, senior citizens and even young adults became homeless,” said Lee at the Korean Support Center for the Homeless.

Next to a stack of The Big Issue Korea at Hong’s usual spot in front of Ewha Womans University, there is a sign in Korean that reads - “We don’t beg for money.”

Whereas Kim gives out tangerines in Sinchon, Hong gives out personally written thank you notes to his regulars.

“The girls at Ewha are so sweet and supportive of my efforts. They often give me a hot can of coffee or something when they buy The Big Issue from me,” said Hong.

“I wanted to repay them in some way. So every night, when I go back to my gosiwon, I spend a few hours writing thank you notes for them.” He added that he feels sorry that he can’t remember all the names of his regulars because he is too old.

Jin says that the most important thing for vendors is rebuilding their self-esteem and getting them to interact with other people again.

“After years of homelessness, they have to fight every day to not give up. A few thousand won here and there won’t be much help. What they need is to feel like they are actually doing something good and being self-sufficient,” he said.

This sense of independence was evident in Kim Su-won as well. When a customer told Kim to keep the 2,000 won change after buying a copy, he firmly shook his head and said, “No. Please take the change.” When the customer took the change after an awkward pause, Kim smiled widely and gave him two tangerines for his kindness.