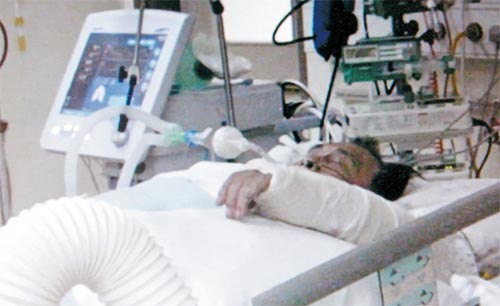 Seok Hae-gyun, 58, captain of the Samho Jewelry, in a hospital in Salalah, Oman, on Saturday after his first operation. He needs a second operation, which has been delayed.


The captain of the hijacked Samho Jewelry, whose bravery and quick wits helped the military rescue the ship and kill and capture Somali pirates, will need a second surgery for gunshot wounds but his condition has delayed the procedure, media reported from Oman yesterday.

Seok Hae-gyun, the ship’s 58-year-old captain, was rushed to Oman’s Port of Salalah and had a five-hour operation shortly after Friday’s rescue. The Joint Chiefs of Staff and the Ministry of National Defense have confirmed that Seok was wounded by gunfire from the pirates.

“Seok’s platelet count went down a bit, so an immediate surgery is inappropriate,” Yang Je-hyeon, a Korean official in Oman, told Yonhap News Agency. “It will take some time before the second surgery. The medical team had a plan to operate on him today, but he lost a significant amount of blood from his gunshot wounds, so his platelet count is still low despite transfusions.”

Yang said it did not mean that Seok’s condition had worsened. “It’s just that he is not fit to have another surgery right now,” he said. “We will schedule the operation as soon as possible when he is ready, but at least not today.”

The chemical tanker and its 21-person crew were rescued Friday by the Korean military seven days after being seized by pirates from Somalia. Eight pirates were killed and five captured. Three special forces soldiers were also wounded during the mission.

According to the military, Seok helped the military’s operation despite the pirates’ brutal attacks. According to accounts from the ship’s crew, Seok was shot several times by a pirate believed to be the leader when special forces began the rescue. The shooter was captured by the Korean military. 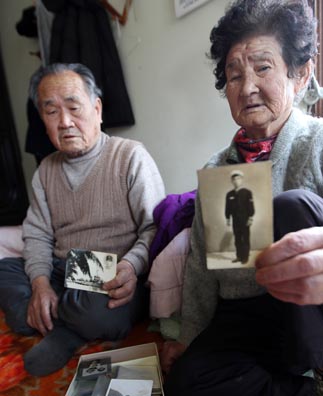 Seok’s mother and father display snapshots of their son yesterday at their home in Miryang, South Gyeongsang. [YONHAP]

Despite the risks involved, Seok secretly mixed water with engine oil to stop its engines, the military said, which significantly slowed the ship. He also changed the ship’s course to ensure it remained in international waters as long as possible to assist the rescue operation. When Korean troops approached the ship earlier last week, the pirates tried to steer the ship to Somalia.

After surgery on Friday, Seok was stabilized but is being sedated to avoid pain. A bullet remains in his body.

A Ministry of Foreign Affairs and Trade official said yesterday that Seok’s condition was not critical, but the medical team was taking great caution because Seok was shot at a close distance.

The captain’s family said yesterday that they wanted to travel to Oman to see Seok as soon as possible. “We are ready to go,” said Seok Hyeon-su, the captain’s 31-year-old son. “My mother is devastated after hearing the news of my father’s condition.”

Seok married Choi Jin-hee in 1975 while he was serving the Navy. Choi, 58, was unable to speak to the media yesterday because she was still in shock. “She was relieved a bit because the first surgery went well,” the son said. “But after hearing the news that he had suffered several gun shots and his condition was more serious than it seemed from the initial report, she is in agony.”

It remains unclear when the family can leave for Oman.

A group of Korean workers in Oman visited the hospital and donated blood.

The Samho Jewelry, escorted by the 4,500-ton Navy destroyer Choi Young, sailed to the Muscat, Oman’s capital. Although the ships are close to their destination, they are to enter the port on Thursday, the Joint Chiefs of Staff said, as more time is needed to discuss how to handle the captured pirates and the corpses of those killed during the rescue.

The rescued crew of the Samho Jewelry will fly home as early as Saturday.