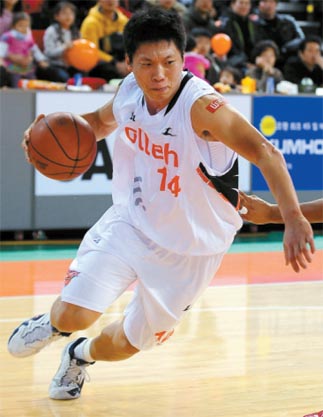 The Busan KT Sonicboom’s ascent to the top of the KBL has largely been because of quick adjustments made by its coach.

With injuries and a lack of size in the front court, KT head coach Chun Chang-jin experimented with some of his players. The gamble paid off. Busan is at the top of the league and boasts an 18-4 record since Dec. 2.

Head coach Chun made several changes in response. One of the most notable was switching fourth-year power forward Park Sang-oh to small forward. Before the promotion, the 30-year-old had been a sixth man, averaging single-digits in scoring.

“Park went through a tough training regimen during the offseason,” said Chun. “I pushed him hard in training to help improve his shot and that aspect of his game has improved by leaps and bounds.”

Park was always considered a tweener - someone who can play two positions but isn’t suited to playing one - because he is 196-centimeters (6 feet, 5 inches) and could never find a role as either power forward or small forward. But with improved speed and a more accurate shot, Park has been a different player, averaging 16.2 points and 5.5 rebounds per game as a starter this year and is now the top scoring domestic player on the KT squad.

“Park’s great in one-on-one situations in the low post and also has a good perimeter shot,” said MBC Plus commentator Park Jong-chun. “He’s known as a player with good strength. To see him manhandle big players in the paint reminds me of Charles Barkley.”

Pyo’s injury also required another radical change. Without another viable option in the starting lineup, Chun turned to one of the least likely candidates from a physical standpoint: Jasper Johnson, a big forward listed at 198 centimeters and 130 kilograms (287 pounds).

With Johnson feeding passes from the perimeter, smaller forwards Cho Sung-min, Cho Dong-hyun, Park Sang-oh and Song Young-jin rotate in and out of the paint to create waves of scoring opportunities. It is especially effective against teams with premier centers, like Seo Jang-hoon of the ET Land Elephants.

“It’s a quick-fix solution I decided on after much deliberation,” said Chun. “It was a risky move, but proved to be successful against top-ranked teams around the league.”