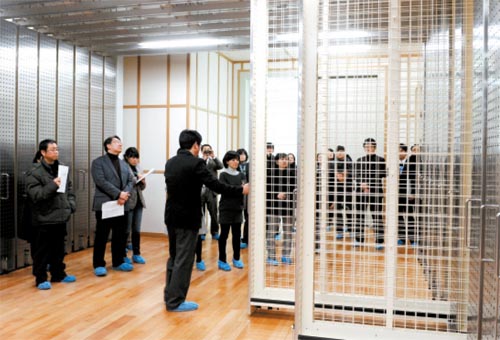 Reporters look at new sliding racks on which paintings will be stored while touring one of nine remodeled storage spaces at the National Museum of Contemporary Art in Gwacheon, south of Seoul, on Monday. [NEWSIS]


The National Museum of Contemporary Art in Gwacheon, south of Seoul, unveiled its newly remodeled storage space to the press on Monday.

The museum’s nine storage spaces now house about 10,000 paintings, sculptures and other artworks, including 48 pieces that the museum acquired last year through purchases and donations. Two media artworks by the renowned video artist Bill Viola are also part of the new collection, the museum said.

Through the three-year remodeling project, the museum’s storage space has expanded to 2,328 square meters (25,058 square feet) from 1,439 square meters, and the new spaces are outfitted with new automatic temperature and humidity control systems. The museum’s security system has been also reinforced. Altogether, the remodeling project cost about 8.4 billion won ($7.51 million).

The museum also unveiled detailed plans for its new Seoul branch, with construction to be finished in November 2012. The new branch will be built at the site of the former Defense Security Command headquarters, which is on the art street east of Gyeongbok Palace in central Seoul.

Bae Soon-hoon, head of MOCA, said that the Jongno District Office is “considering whether the street near Anguk Station leading to the new museum can be turned into a pedestrian-only street.”

The street he was referring to is called Gamgodanggil, which is lined with small galleries, design shops, cafes and restaurants. The street is widely known as a good spot for a date or a stroll.

Bae said that the new museum will connect the entire area - Gyeongbok Palace to the west, Samcheong-dong’s main road to the north and Bukcheon street to the east - because the museum will have gates on every side, allowing people to pass through the grounds as they move from one street to another.

The museum’s plan to charge admission at the Seoul branch is part of its effort to increase its financial independence. The museum said its revenue is expected to account for only 4.5 percent of this year’s budget. However, the museum aims to increase that to 10.5 percent in 2016, with the ultimate goal of 40 to 50 percent in the future.

With that aim, the museum said it wants to become a state-run corporation next year.