After rescue, another pirated ship stuck in limbo

After rescue, another pirated ship stuck in limbo 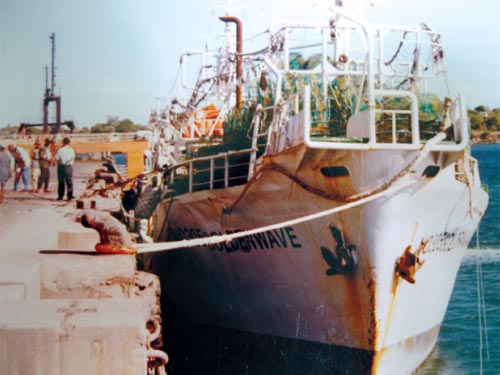 The Geummi 305, which is also called the Golden Wave, was hijacked by Somali pirates off Kenya last October. This photo was taken when it anchored at the port of Mombasa, Kenya, before it was hijacked. Provided by Kim Jong-gyu


After the successful rescue of the Samho Jewelry from Somali pirates in the Arabian Sea, the government is worrying about the fate of a 240-ton crabbing boat hijacked by pirates off Africa last October.

In a cabinet meeting yesterday, Prime Minister Kim Hwang-sik requested the Ministry of Foreign Affairs and Trade and other related ministries to “come up with every possible measure to rescue the crew of the Geummi 305.” The boat is also called the Golden Wave.

“Protecting lives and ensuring the security of the people are important duties of the nation,” Kim said.

He also praised the special forces rescue of the Samho Jewelry Friday, which he called a “splendid achievement” that sent a clear message to the international community and Somali pirates that “Korea does not negotiate with pirates.”

The Geummi 305, with two Koreans, two Chinese and 39 Kenyans aboard, was hijacked by pirates while fishing in waters about 10 miles off Lamu, Kenya, in the Indian Ocean.

A source based in Kenya told the JoongAng Ilbo that some of the Geummi 305 crew, including the captain and a chief engineer, were forced to help the pirates hijack other vessels in November and December because no ransom had been paid for their release.

According to an alert by the NATO Shipping Center (NSC), part of the Allied Maritime Command Headquarters Northwood, the Geummi 305 and two other hijacked vessels “have left the anchorage and are assessed to be used by pirates as motherships.”

Kim Jong-gyu, a Korean shipping agent based in the port city of Mombasa, Kenya, told the JoongAng Ilbo yesterday that the Geummi 305’s captain, Kim Dae-geun, 54, and chief engineer Kim Yong-hyun, 68, were forced to operate the vessel on behalf of the pirates.

The agent said that he provides Kenyan crews, food and other supplies for the Geummi 305 and that he negotiated with the pirates to get them to lower their ransom demand for the ship and crew to $600,000 from $6 million. Kim said Capt. Kim Dae-geun was infected with malaria recently and was allowed to halt his forced assistance to the pirates. Kim Jong-gyu slammed the Korean government for not trying to resolve the situation. “When the Geummi 305 was captured, the Foreign Ministry said it would help us if we stay quiet on this matter, citing the G-20 Seoul Summit,” Kim said. “But the ministry hasn’t called me since. Does the ministry think it’s O.K. for Korean nationals to be forced to work as Somali pirates?”

Kim said he has plans to come up with $300,000 of the $600,000 ransom demand, but he’s struggling to gather the rest. Kim and Capt. Kim Dae-geun’s wife requested a loan from the Foreign Ministry, but it was rejected, the agent said. “We will do everything we can to repay the loan if the crew is released safely,” Kim Jong-gyu said. “Please help us.”

According to the ministry, the Geummi 305 is considered an illegal fishing boat because it is registered as a local trawler and did not receive government approval for fishing in foreign deep seas. The Foreign Ministry also says it is difficult to give a loan for the Geummi 305 because its owner already took out a 100 million won ($89,405) loan from the government by using the ship as collateral.

Minister of National Defense Kim Kwan-jin had said Monday that the ministry was considering exchanging the pirates captured during the rescue of the Samho Jewelry for the Geummi 305 crew if the captured pirates were linked to the group that hijacked the crabbing boat. But the ministry withdrew that idea yesterday. “There were some issues about exchanging the [Geummi] crew for the captured pirates, but it is the government’s position that it will bring the pirates here and punish them,” Defense Ministry spokesman Kim Min-seok said.

Analysts feel an exchange is unlikely because the hijackers of the two ships probably aren’t connected. The Samho Jewelry was hijacked in the Arabian Sea, and the Geummi was taken in waters off Kenya.