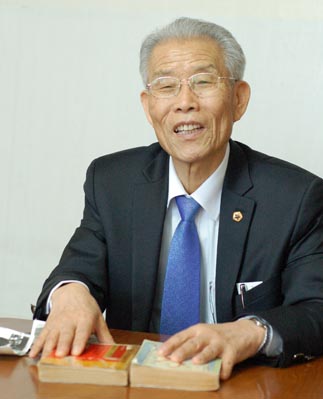 Ko Joong-ryeol is the only remaining witness to the July 1959 execution of Jo Bong-am. By Lee Han-gil

An 81-year-old Ko Joong-ryeol wore a well-ironed suit and benevolent smile. He didn’t look anything like the prison guard who watched on as 200 prisoners were put to death - some guilty and some innocent.

Ko is the only surviving witness to the 1959 execution of leftist leader Jo Bong-am after he was convicted of espionage and treason.

Before becoming speaker of the National Assembly in 1950, Jo had been engaged in anti-Japanese activities in China. He challenged President Syngman Rhee for the presidency in 1952 and 1956 on a platform of peaceful unification. Jo turned out be a threatening rival to Rhee in the 1956 presidential election.

In 1958, Jo was arrested for plotting a rebellion against the country by forming a progressive party and was sentenced to death. Legal authorities under the Rhee administration fabricated espionage charges and had Jo executed.

Since then, historians have mostly concluded that it was a targeted political killing. In 1991, some 86 members of the ruling and opposition parties submitted a petition to the National Assembly calling for a posthumous pardon. Finally, on Jan. 20 of this year - 52 years after Jo’s death - the Supreme Court ruled Jo to be innocent.

“I’ve been praying for the past 50 years for innocent death-row convicts such as Jo Bong-am,” said Ko. “I’m so happy that the recent ruling restored Jo Bong-am’s honor. It is a step forward in an era of reconciliation, going beyond an era of hatred.”

Jo was executed on July 31, 1959. Ko remembers the day vividly as it was his first time participating in an execution. “Jo wore a white jeogori [a traditional jacket] and white rubber shoes when he was put to death,” Ko recalled. It was 18 hours after a court dismissed his petition for a retrial.

Ko said there was no sign of fear in Jo’s eyes. Jo stood upright in front of a prison warden, prosecutors and prison guards before being forced to his knees.

After the prison warden asked Jo if he had any last words, he responded, “If I have sinned, the only sin would be taking part in a political movement so that the people have a better life. However, I have lost to Syngman Rhee, and it’s only natural for the loser to be killed by the winner. I only wish that my death isn’t fruitless and contributes to the march towards the democracy of this country.”

While listening to Jo’s last words, Ko said he was convinced that Jo was not a spy or a communist. No one would use their final words to lie, the ex-prison guard remembered thinking. As soon as Jo finished speaking, the warden shouted, “You don’t have a religion, right? Go ahead with the execution.”

Jo was then taken behind a curtain to the gallows. Ko describes Jo’s death as the “tragedy of the era.” It was an era of injustice: South Koreans could be convicted of espionage for serving food to North Korean communists; the poor weren’t appointed lawyers; and many across the country were unfairly convicted of murder.

As a devout Catholic, Ko said religious motivations were behind his decision to become a prison guard. He said he wanted to reform death-row convicts. By the time Ko retired in 1971 after 19 years on the job, around 100 prisoners repented their sins after meeting him.

But Ko also had to witness the executions of innocent people. “I couldn’t stand the feeling of guilt, watching those prisoners dying as victims of judicial murder,” said Ko.

He has devoted himself to banning capital punishment since he retired 40 years ago. Ko says he has two wishes before his days end. The first is to clear the names of those who were put to death under false accusations, like Jo. The second, he says, is a constitutional ban on capital punishment.