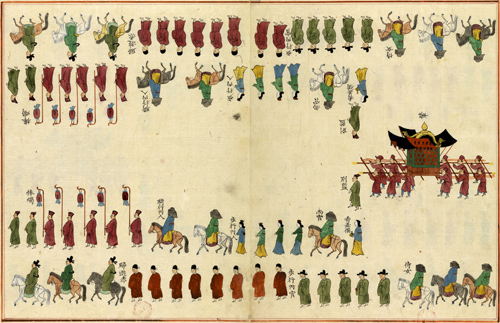 A part of “Uigwe,” the books that dictate the protocols of ceremonies and rites of the Joseon Dynasty (1392-1910), that are now in France. [JoongAng Ilbo]


The remaining 296 volumes of Korea’s ancient royal protocols being held at the National Library of France will all be returned to Korea by the end of May, according to the Ministry of Foreign Affairs and Trade yesterday.

The ministry said Park Heung-shin, Korean ambassador to France, and Paul Jean-Ortiz, Asia director for the French Ministry for Foreign Affairs, signed a treaty yesterday in French time regarding the return of the books, meaning that all the volumes will be returned to Korea after 145 years.

The books were taken in 1866 by the French Navy from the Joseon Dynasty’s royal library, called Oegyujanggak, on Ganghwa Island. Another Oegyujanggak book was returned in 1993 by French President Francois Mitterand.

The treaty is a follow-up to an agreement made between President Lee Myung-bak and current French President Nicolas Sarkozy during the G-20 Summit in November. Korea has officially sought the return of the 297 volumes since 1991. The ministry said the treaty stipulates that France completes the return of the 297 books to the National Museum of Korea before May 31.

The treaty also allows that some of the books will be taken to France briefly in 2015 and 2016 for an exhibition as part of Korea-France cultural exchange programs, the ministry said.

The two countries agreed to a five-year lease agreement that could be renewed indefinitely, the ministry said. In November, Lee and Sarkozy agreed on the conditions for the return of the books.

The Oegyujanggak books will be exhibited for two months at the National Museum of Korea beginning July 18, the museum said yesterday.