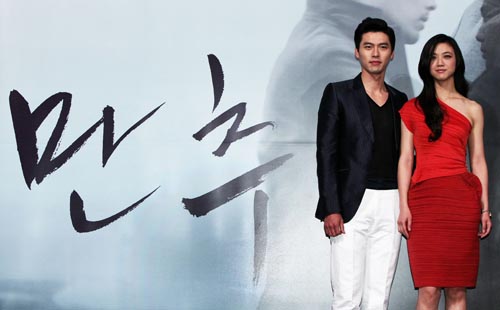 Korean actor Hyun Bin, left, and Chinese actress Tang Wei pair up in “Late Autumn,” which is slated to open next Thursday in Korean theaters. [YONHAP]


It took just five seconds for “Late Autumn” to sell out at the 15th Pusan International Film Festival last October. It was the fastest-selling film among the hundreds of entries at Asia’s biggest film festival.

Four months have passed since then, but that has not diminished anticipation for the movie, which is a collaboration between production companies in Korea, China and the United States.

Unlike previous multinational projects, which flopped at the box office, ticket sales for “Late Autumn” are expected to be high.

Tickets to 10 prescreenings organized prior to its official release on Feb. 17 all sold out within an hour earlier this month.

The film’s early success can be attributed to the participation of Chinese actress Tang Wei of “Lust, Caution” (2007), Korean actor Hyun Bin, famous for his leading role in the popular television series “Secret Garden” (2011), and Korean director Kim Tae-yong, who worked on the 2006 award-winning film “Family Ties.”

Although Tang nor Kim have had long careers - she has been in the business for seven years and he has been in it for 12 - neither has many films to their name. She has appeared in just two films and Kim directed just two commercial films prior to “Late Autumn.” But both have received critical acclaim for their work and both “Lust, Caution” and “Family Ties” won numerous international film-festival awards.

The three appeared at a press screening yesterday in eastern Seoul to promote the film, which is based on a 1966 Korean film classic of the same name.

The film, set in foggy Seattle, follows two strangers, Anna and Hoon, who meet and fall in love over the course of three days.

Anna is serving a nine-year prison term for killing her husband but is out on leave to attend her mother’s funeral when she meets Hoon, a male prostitute.

Tang said that she had to work hard on withholding her feelings throughout the film to portray the quiet and withdrawn Anna.

“Every moment of playing Anna was difficult and challenging,” the 32-year-old actress, who arrived at the press screening in a fiery red dress, told reporters through an interpreter.

According to Kim, Tang is energetic and bubbly in person, which is in stark contrast to her character, and he said Tang devoted a great deal of time to shaping the character.

Meanwhile, Hyun said he found it daunting to show the inner complexity of his character Hoon, who despite his profession, is a gentle person who tries to bridge the gap between Anna and the outside world.

“The screenplay [written by Kim] was almost like a rough draft of the story,” Hyun said. “Kim wanted us to fill in the blanks to build our characters, and the process was extremely interesting.”

Kim admitted that the lack of a detailed screenplay sometimes resulted in a painstaking production process.

“It sometimes took us four hours to shoot a single scene in which one actor says about eight lines,” Kim said.