‘It’s hard to give food to Pyongyang,’ says envoy

‘It’s hard to give food to Pyongyang,’ says envoy 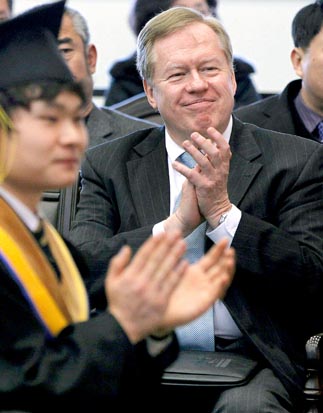 U.S. envoy on North Korean human rights Robert King attends the graduation yesterday of high school students who defected from the North at the Hangyeore Middle and High School in Anseong, Gyeonggi. [REUTERS/YONHAP]

Robert King, the U.S. State Department’s special envoy for North Korean human rights issues, said that North Korea is a tough country to give food to - even if a donor wants to.

King explained that in the past, the U.S. had agreed to give North Korea 500,000 tons in food aid, but was only able to give 170,000 tons as North Korea refused the rest and ordered foreigners who had entered North Korea to deliver the aid to leave.

The envoy also said that it has not yet been decided whether the U.S. will grant food aid to the North and that three prerequisites must be fulfilled if it does.

The three conditions, he explained, are whether a real demand for food truly exists in North Korea, whether the North’s need for food is on the same level as other countries in need of aid, and whether monitoring of the aid will be securely guaranteed. Only when these three prerequisites are met can the U.S. grant aid, King said.

When asked by one participant about the effectiveness of the U.S.’ North Korean Human Rights Act, King said the human rights act is an expression of the U.S.’ view that rights should be improved in North Korea. He said that supporting non-governmental organizations working to improve human rights is the most important task for the U.S, and that the flow of information into North Korea by these groups should be encouraged to break the control the North Korean leadership has on its citizens. The main problem with North Korean human rights, King said, is the power of a closed regime, referring to leader Kim Jong-il and his power elite.

King returned to the U.S. yesterday, wrapping up a visit to South Korea during which he met with government officials, including Unification Minister Hyun In-taek and special envoy for the six-party talks Wi Sung-lac.