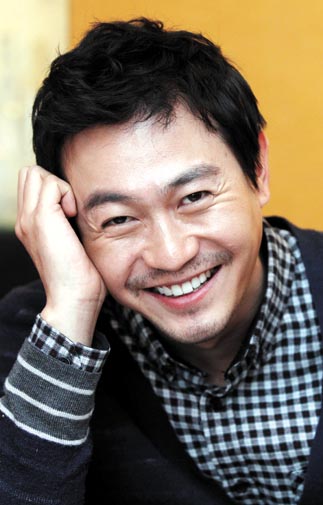 Actor Park Yong-woo wears the expression of a man who seems at peace with himself and content with his life. And having played numerous characters in romantic comedies, action thrillers and even television dramas, the 40-year-old veteran actor says he has learned to appreciate the small things in life.

Park is currently busy promoting his new film “Children…,” which is set for release on Thursday and is based on the true story of five students in Daegu who went missing on March 26, 1991, before their corpses were found more than 10 years later in September 2002. The 15-year statute of limitations on the case expired in March 2006 and the case remains unsolved to this day. It is considered one of the best examples in Korea of a mishandled case.

Park plays Kang Ji-seong, a television producer who is eager for a scoop on the case in order to boost the ratings of his investigative documentary show. But Kang eventually becomes deeply immersed in the case and ends up devoting much of his time and energy to discovering the truth.


Q. Were you hesitant about taking on this project since it is based a true story?

A. I did take some time to consider whether I would do the film because [real-life stories are] not considered to be popular with mainstream audiences. I was also worried that the audience might find the topic a bit too dark and heavy. But I think the film has a clear message for society and I must also add that it’s a fascinating film.

What do you find fascinating about it?

You won’t see too many elaborate scenes in the film but because this story - which spans more than a decade - has been condensed into two hours, the film’s tale is dynamic. The audience will also learn new facts about the case. On a personal level, I hope the message contained in the film can be shared on a broad scale.

Your parted hairstyle in the latter part of the film gave you a comical appearance. How did that hairstyle come about?

I wanted to illustrate my character’s aging process over the years. I recommended the hairstyle and worked on it myself. I didn’t wear any makeup for those scenes, either.

What else did you do to develop your character?

There is an action-packed scene in a slaughterhouse in the latter half of the film. I heard that you had to reshoot the entire scene after filming had finished. Why?

You’re right. I received a call from the director 15 days after filming had ended. He wanted to redo the whole scene. Honestly, I was a bit flabbergasted by the situation at first. It was the first time in my acting career that such an incident had taken place. It took a whole day to shoot the scene again. I think the director felt the scene was lacking something. From an actor’s point of view, I thought the first round of shooting focused more on the realistic aspects of the situation but we were able to add more drama and suspense the second time around. The final product has a good mix of the two.

You’ve been known to correctly estimate the box office draw for your films. What do you think about this film?

Ah, how did you know? I’ve been able to do that for most of my films, but I really don’t have a clue this time. I’m curious myself as to how well the film will do.

You look at peace with yourself. Have you been doing anything special?

I don’t know if I’ve matured with age but I think I’ve come to realize that you can’t have everything go the way you want in life. I feel a lot happier and appreciate the smaller things in life now. I think my religion has also played a big role in my life over the past three years.