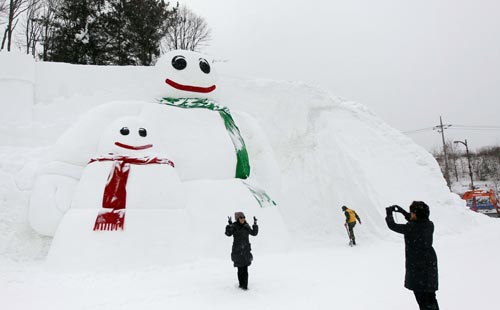 Visitors to the 19th Daegwallyeong Snow Festival take pictures with a group of giant snowmen last week. The annual festival in Pyeongchang, Gangwon, features a program of snow sports and sculptures and will continue through Sunday. See FESTIVALS, below right. [YONHAP]

Tomorrow: Rose Jang is a Korean-American singer who made a name for herself internationally by mixing operatic arias with classic pop hits and songs from musicals. One of Jang’s most famous pieces is her rendition of the song “Memory” from the musical “Cats.”

During her concert in Korea, Jang will sing songs from a variety of genres from rock to opera. The lineup will include “All I Ask of You” from the musical “The Phantom of the Opera,” “My Heart Will Go On” by Celine Dion, and an aria from the traditional Korean opera “Doraji.”

Thursday to Saturday: During this concert series, celloist Jung Myung-hwa, American pianist Sergei Babayan and violinists Clara Kang and Wei-hwang Hong will play pieces from a variety of different genres such as pop, classical and musical theater.

The program includes Pachelbel’s Canon, “Fly to the Sky,” “Sukdaemuri” and others.

Sunday: English blues-rock guitarist and singer-songwriter Eric Clapton is returning to Korea for the third time since 2007.

Clapton has been inducted into the Rock and Roll Hall of Fame three times and was ranked fourth on Rolling Stone magazine’s list of the 100 top guitarists of all time.

Schiff won a Grammy Award for best instrumental solo performance in 1990 for his version of Bach’s “English Suites,” and in 2007 he won the Royal Academy of Music Bach Prize.

Feb. 25: The KBS Symphony Orchestra will present pieces by Mendelssohn with Stefan Pi Jackiw, an American classical violinist who has played Mendelssohn pieces on the European stage since 2000.

Feb. 26: Mexican operatic tenor Francisco Araiza has twice won the Orphee d’Or from the Academie Nationale du Disque Lyrique Paris. In this concert, he will be performing pieces by Mozart, Veber and Verdi.

After his death, Bailey Rae went on a spiritual hiatus for nearly two years and finally returned last year with her second album, “The Sea,” in January 2010. At the concert, she will perform songs from “The Sea” and her eponymous first album, including hits such as “Like a Star” and “Put Your Records On.”

March 13: In this concert, Angelique Kidjo will perform traditional music that she learned at her home in Benin. In 2008, her album “Djin Djin” won a Grammy Award for Best Contemporary World Music Album. Her performances are energetic and use guitar, bass and percussion.

To Feb. 27: Based on the movie of the same name, and with music by Elton John, this musical has been a hit worldwide.

This is the first non-English language production of the show, which was previously produced in Britain, Australia and the United States.

Friday to Sunday: Who says age determines whether you can dance or not?

In this performance, grandmas dance around to traditional Korean music and modern pop songs in a work that is part of a larger archival project by choreographer Ahn Eun-me, who traveled to the Korean countryside to capture the women’s movements for a future documentary film.

Performances are at 8 p.m. on Friday and at 5 p.m. on Saturday and Sunday.

Feb. 24 to 27: The Korea National Ballet is presenting the Paris Opera Ballet’s version of “Giselle” for the first time in Korea.

The ballet tells the story of a peasant girl named Giselle who dies but comes back as a ghost to protect her lover, Albert, from a group of evil female spirits. The ballet was first presented in 1841, and the choreography is based on the original French version from the 19th century.

To March 19: This play is about a love triangle between a Vietnamese singer, a Korean private and an American colonel during the Vietnam War’s Tet Offensive in 1968.

This story of Ethiopian princess Aida is one of forbidden love. Aida is captured and sold into slavery in Egypt, where Egyptian military commander Radames falls in love with her. As the military commander of Egypt, Radames is not allowed to love a woman from a different country, and he struggles to make a decision to choose between her and his service to the Pharaoh. To make matters worse, the Pharaoh’s daughter, Amneris, is in love with him. Will Radames chose love or success?

To Tomorrow: Pyeongchang originally postponed the start of its annual trout festival from late December to early January because of concerns about foot-and-mouth disease. But the festival got into full swing last month and is now entering its final stages. Today and tomorrow are the last days to enjoy snow, ice and trout fishing.

To Sunday: This festival features snow sports and sculptures.