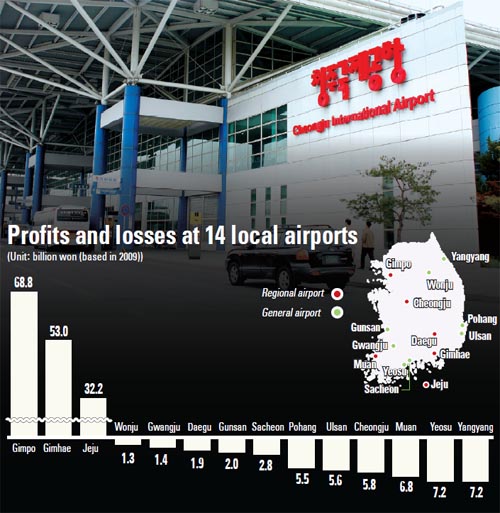 A flight from Bangkok with only 34 passengers on board landed at Cheongju International Airport at 2 p.m. last Friday. The plane seats 194.

An hour later, an air of silence filled the airport once again.

Only two or three flights to Bangkok, Hong Kong or Osaka, Japan, are scheduled certain days at Cheongju. On Tuesdays and Thursdays, when no flights are scheduled, there’s no sign of life except for a couple of administrators. In 2009, the airport ran a deficit of 5.8 billion won ($5.1 million).

Korea Airports Corporation (KAC), which manages 14 Korean airports, announced on Feb. 11 that it will sell Cheongju Airport, which has been suffering from a long-term deficit, to a private party - the first time this has ever happened in the country. Incheon International Airport, which is a profit-making airport, is managed separately from KAC airports.

“Two organizations have bid on the airport,” said Bae Yong-su, vice president of the KAC, which plans to complete the transaction by the end of June. And even as the government proceeds with plans to build a 10 trillion won airport in the southeastern part of the country, 11 of the 14 airports that KAC operates are losing money, KAC said.

Only three - Gimpo, Jeju and Gimhae - are profitable. The other 11 airports are in the red from anywhere between 1 billion won and 7 billion won each. These airports barely manage to operate, only surviving because of subsidizing investments from the three airports that run surpluses.

“All of the local airports suffering from deficits would collapse if subsidies were cut off,” said Lee Gang-bin, a professor in the trade department at Sangji University.

In 2009, Gimpo, Jeju and Gimhae recorded a profit of 154.1 billion won, the KAC said. The other airports recorded lost a total of 48 billion won.

And despite the three airports running a surplus, they are all aging and in need of renovations. The Ministry of Land, Transport and Maritime Affairs plans to spend 20 billion won to expand Jeju and improve runways at Cheongju and Yeosu.

Some believe the financial troubles stem from there being too many airports, and politics have also played a role.

“Powerful politicians and heads of local governments have pushed construction of local airports that don’t really have economic power,” said a ministry official.

There is also the issue of competition, in part due to the development of high-speed trains and numerous expressways throughout the country.

And some of the 11 airports have even shut down for normal passenger operations, and in the process, they have wasted hundreds of billions of won. Also, some projects were halted, while others failed to open despite being built.

Yangyang airport is, in fact, a ghost airport. Construction began in 1997 and it opened in 2004 at a cost of 350 billion won. However, since October 2008, there have been no regular flights. Eleven KAC employees are stationed there to administer the building.

Ulsan’s airport shares a similar story. A 140 billion won airport in Uljin, North Gyeongsang, it was built during the Kim Dae-jung administration. It was never used. Last year, it was turned into a pilot training center after another investment of 5 billion won.

And the failure of Ulsan came with advanced warning.

“In 2001, the Korea Transport Institute forecasted that there would be only 50 users a day,” said an official at the institute.