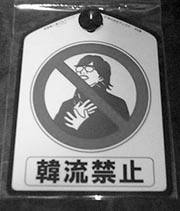 Korean girl groups use sexual favors to get their way and the Korean government has invested over 1 trillion yen ($11.9 billion) to support the Korean Wave, at least according to one Japanese comic.

The comic is not based on fact, but is a microcosm of the backlash against the Korean Wave, or hallyu, which has recently been led by Korean girl groups Girls’ Generation and Kara.

Since the Korean Wave began sweeping across Asia, anti-Korean Wave sentiment has emerged in different countries over the years.

In Japan, a couple of so-called “anti-Korean wave” comics portray girl groups as hostesses and have sold thousands of copies.

In Taiwan, nude composite photos of a member of Super Junior can be found on many Taiwanese Web sites. One Chinese media outlet posted an article with a title implying that a member of Girls’ Generation appeared in pornography.

Song Won-seop, director of JoongAng Entertainment and Sports, says the reason behind the backlash is Korean disinterest in foreign media.

“Korean industries are passionate about selling their content, but tend to refuse foreign content,” Song said. “This provokes a sense of discontent in other countries.”

“In particular, Chinese people feel that the Koreans under appreciate Chinese culture,” Song added. “Similarly, some Japanese are upset at hallyu because Korean culture used to follow Japanese trends.”

For some countries, it’s a combination of politics and psychology.

“In Taiwan’s case, people have antipathy toward Korea based on history. Korea was a political and economic ally of Taiwan, but changed its alliance to China. Taiwan feels Korea betrayed them,” Song said.

“Many conservatives in Japan feel that Korea is still an underdeveloped country that used to be their colony. From their point of view, Korea is politically and economically challenging Japan.”

Some suggest anti-Japanese sentiment in Korea has also inflamed a backlash against the Korean Wave.

Though the causes are complex, Song suggests a way to ease tensions: “The best way to cope is to try to seriously consider how foreigners view Korea and be interested in their culture as well.”

*This article was written with the aid of Korea JoongAng Daily reporter Seo Ji-eun.