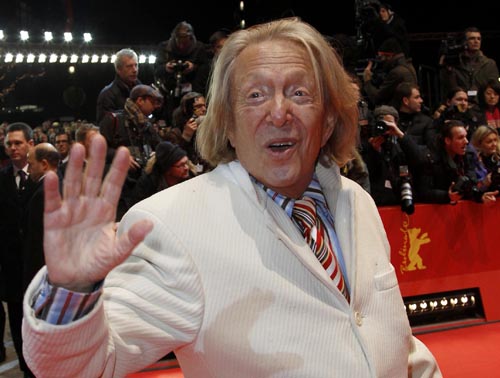 Shimon ‘Rolf’ Eden arrives for the opening of ‘True Grit’ at the 61st Berlinale film festival in Berlin on Feb. 10. [REUTERS/YONHAP]


BERLIN - The life of Germany’s most celebrated playboy has made a big screen splash at the Berlin film festival, offering a riveting portrayal of the Jewish night club mogul who helped post-war Berlin learn to laugh again.

“The Big Eden,” an entertaining documentary about Shimon “Rolf” Eden, is more than just a story about an 80-year-old who has seduced a long line of young women over the last 60 years with his unique charm.

The warmly applauded film shows unexpected facets of Eden - an Israeli soldier who returned to Berlin after World War II with no bitterness about the Holocaust - and how he made his fortune in Berlin running the city’s most popular night clubs.

“I’ve had a lot of luck in life,” Eden said on Tuesday after watching the world premiere with former girlfriends, his seven children and most of their seven mothers.

Eden, who boasts that he has had thousands of girlfriends, may be seen in Berlin now as a bit of an oddity. With bleached blond hair and a permanent tan, he is often seen strolling along Berlin’s avenues with one of his many young women on his arm.

But the film by Peter Doerfler shows new insights into the ever-smiling man whose family escaped the Holocaust by leaving Berlin in 1933 and who in the 1950s went to Paris with just a few dollars in his pocket.

“A lot of people groaned when I first said I wanted to do a film on Eden,” Doerfler told Reuters, admitting he had once thought that he was an embarrassing figure. “But there’s so much more to him that you discover when you look a bit deeper.”

Eden opened the first of five West Berlin nightclubs in 1957 with the help of a 5,000 mark grant from the West German government. His boundless optimism helped make it the hottest spot in town. Everyone from the Rolling Stones to Liza Minnelli, Louis Armstrong and Jack Lemmon found their way there.

“I didn’t care about what had happened 10 years before,” Eden tells some friends in Israel of his return to Berlin. “I was lucky. All my relatives survived. I’m not a victim. I was a winner. I made people happy. I helped people forget misery and think about beautiful things.”

Several former girlfriends appear in the film to explain how his sunny optimism, perseverance and seemingly unlimited resources won them over.

Eden briefly gained international fame eight years ago when he offered 250,000 euros ($340,000) of his fortune to the last woman he has sex with, provided he dies in her arms after a “final, glorious orgasm.” He said the offer still stands.