In testing, the level of difficulty is high

In testing, the level of difficulty is high 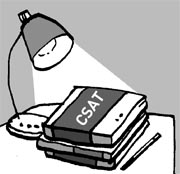 Every year, the Collage Scholastic Ability Test (CSAT) becomes a subject of controversy, especially regarding its level of difficulty. In 2003, a student committed suicide after taking the test. After the CSAT was administered, the media reported that test scores would go up by 10 to 15 points from the previous year. The Korea Institute for Curriculum and Evaluation (KICE) announced that the test was relatively easy, and private institutes predicted that students would get higher scores. But one female examinee learned that her score was not as high as the reported average so she killed herself the morning after the exam. That afternoon, KICE announced that the average score had actually dropped by two to three points from the previous year. It was a tragic result.

The basis of the controversy over the CSAT is its inconsistency with the level of difficulty. We often say it is either a “fiery” CSAT or a “watery” one. The 2002 CSAT was a fiery one. Compared to the year before, the average score was 66.5 points lower, which was the largest margin of decline in its history. Because the discrepancy was so big, students could not refer to college admissions data from the past. There was much confusion about what the scores meant. The KICE president apologized for the failure to control the difficulty level, and the minister and vice minister of education expressed their regrets.

The year before was a typical “watery” CSAT. Students found the test so easy that they said they could pick out the answer just by looking at the choices without reading the question. The average score went up by 27.6 points, and 66 people got perfect scores. In 2000, there were only two students who got the full 400 points. Since the 2001 CSAT failed to differentiate students in different levels, even a student with a perfect score did not qualify for the special admissions round at Seoul National University.

This year’s CSAT is expected to be “watery,” and it is likely to be accompanied by much chaos. Recently, the Ministry of Education, Science and Technology announced that the CSAT would become easier, and one percent of test takers, or 7,000 students, will get perfect scores in each subject area from 2012. If the test becomes easier overall, a few hundred to a thousand students will get full marks. Top students may be penalized for getting one or two questions wrong, so the focus will be on not making a mistake rather than testing what has been learned.

Students are already anxious that essays and interviews will become more important in college admissions. It is predicted that more students who fail to get into the college of their choice will retake the test. It is frustrating to see students swayed by the difficulty level of the CSAT. After all, students are not test subjects.